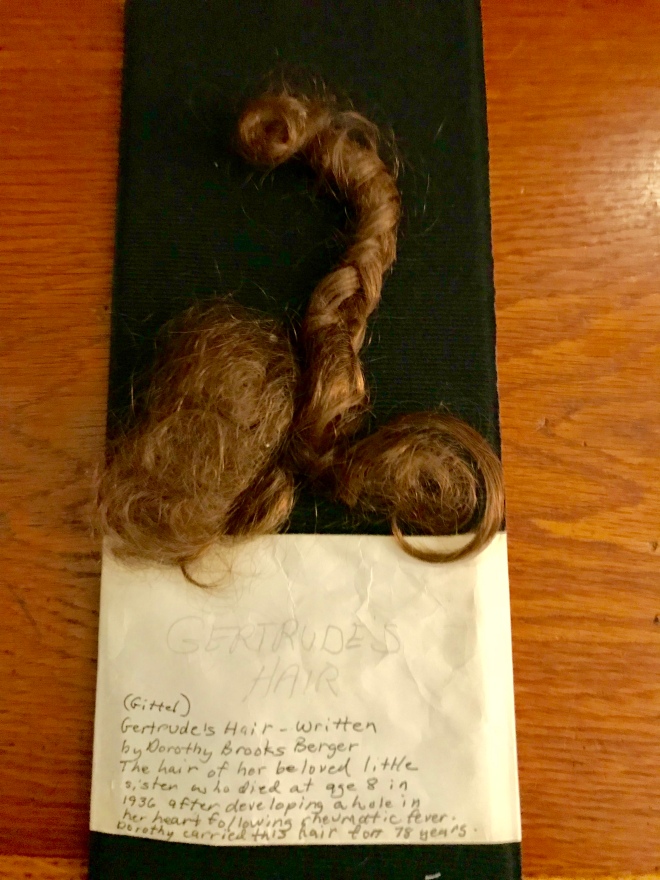 My mom and I had a long turbulent life together. Not much different than many people’s lives. I knew she really loved me. She was affectionate and funny and on my side. She was more like a friend than a mom. For a long time, I didn’t know that wasn’t a good thing. I don’t think there was a boundary in our relationship. In my teens, I took on whatever she tossed into my lap, inappropriate confessions, dark secrets and her never-ending physical problems.

I started recognizing that I was more like her mom than she was mine in my late 20’s. My frustrations grew, burgeoning through the years and finally, becoming intolerable when my dad died at 67 in 1989. I still remember what happened when my dad decided to quit his chemo after only one round. His scans were all stable, but he was a finicky guy and some of the incumbent side effects of treatment were just more than he could manage. We were outside the hospital and he sent my mom on some fake errand so he could tell me that he wasn’t going to continue the struggle, and then told me to make his funeral arrangements and to get the best deal. Damn funeral industry.

I did it. Never batted an eye. I’d just turned 38. I was married with a full-time job, two little kids and a husband with a herniated disk.  But I took the lateral pass from him and became the power figure in my mom’s life, the third in line behind her mother and him. My mom never learned to drive. I called my new life Driving Miss Dorothy. Over the years we had many clashes as I alternated between my responsibility to take care of her and my deep desire to feel parented. For 25 years we wrangled with this confusing mess, a tangled knot of love, resentment, grudges and betrayals, real and imagined. Looking back, I don’t know how either of us survived.

But then, the love always hung around. Mom always told my sister Cheryl and me that she’d never really leave us. That even after she died, she’d be hovering around, watching over us all the time. An idea truly in keeping with the little girl she was at heart, a street-smart, tough little kid who survived so much against tall odds. Despite her challenges, she made it into her early 90’s.

During those 25 years, my mom lived on her own until her late 80’s. Then she started having scary little accidents, like forgetting to turn off a stove burner and taking the wrong insulin at the wrong time. The whole family who lived here in town held a group meeting during which we decided that she needed to move into my house. I had the most space and was getting ready to retire. And although we had friction, no one wanted to see her in a nursing home. She needed to help us out  financially to build handicap-accessible bathrooms for her, but eventually we did it all and in she came. Downsizing her from a two bedroom duplex was difficult but we managed to surround her with her most precious possessions so she was comfortable. Sadly, we continued to clash and then Michael was diagnosed with his wretched cancer. Plans were made to move her into an attractive assisted living facility where she remained for two years.

Then in December 2014, mom got the flu. And for whatever reason, the little hints of dementia that had been coming and going for a few years locked in place during her hospital stay, making it clear that she didn’t have the executive skills to live in assisted living any more.  The time for the dreaded nursing home arrived. It was the third, and ultimately the last move for her. The assisted living facility gave only a small window of time for us to remove all her things. This move was different. She’d have a roommate. Her beloved mahogany bedroom furniture would have to go, the bed where all her babies were conceived and where she wished to die. Thankfully, she didn’t feel that loss.

This last move was the ultimate invasion of her private space. If there was ever any question of who the power figure was, who the mother figure was, that was asked and answered. Michael’s cancer was surging. I had very little time to devote to clearing away mom’s things. Stuff was stuff. I made a valiant attempt to redistribute treasures given to her by other family members so no one would feel slighted. There was no way we could all be together to sort things out. I was like one of those authors who tell you to hold an object in your hands and if you feel nothing, get rid of it. I felt virtually nothing but desperation. Until I found the one thing that could stop me from my rapid and ghastly task discarding of a lifetime in  just a few hours.

There were two mahogany bureaus which held clothing in her bedroom. They were transported from her apartment to my house to the assisted living center without ever having been opened by anyone but her. They needed to be emptied. Mostly there were just clothes. But then there was one of those drawers, the kind usually found in a kitchen or a desk, with piles of small random items in no particular order.  THAT drawer. I started working my way through the piles, Handkerchiefs, nail clippers, safety pins, ribbons. Empty sachet packets, tiny address books, a random footie. But then there was an envelope labeled Gertrude’s hair. Gertrude was my mother’s young sister. She had two, Norma and Gertrude. They both died. Norma was about 6 months old and may have been a SIDS baby. My mom told me she was taken out of the house in a suitcase when she died. An unforgettable childhood trauma. Gertrude or Gittel had rheumatic fever and developed a hole in her heart. The type of thing that would almost never happen today. My mother adored her. she waited on her and combed her hair, brought her a cooked chicken leg, and spent lots of time with her. But eventually she weakened and died. One of mom’s most vivid memories was kissing her cold cheek. She talked about it her whole life. When I saw that envelope, I couldn’t believe it. My hands shook as I ripped it open. Nothing, not even a strand inside. I moved on. Suddenly there was a baggie, bulky. Inside I saw another handkerchief, wrapped around something else. Like Russian matyroshka dolls. Another envelope labeled Gertrude’s hair. And there it was. A long shiny braid, with curls at the end, a rich auburn-brown. The color reminded me of my daughter’s hair.

I stood and held it for a long time. I realized that for 78 years, my mom had carried this braid with her from state to state, city to city, house to apartment, apartment to apartment. I was profoundly moved. I knew about the love, I knew about how much my mom wished she had a sister. But I never knew about this most intimate talisman that she held close from childhood. Her own mother, a truly difficult woman, must have gone mad when her daughters died. And although my mom had terrible hostility toward her mother,  a part of her must have always understood that these losses broke her. Mom always said the one thing she could never stand was for one of her children to die before her.

I display that hair, that love, that history in a labeled shadowbox in my home. As my mom slipped further into dementia in 2015, my brother died in April. I used all my power as her executor, to convince the family not to tell her. I couldn’t see any reason to thrust that pain on her. As Michael got sicker, she said, maybe if Michael dies, you and I should try living together. I gently reminded her that we’d tried that already and she asked if I kicked her out because I couldn’t stand her. We both laughed.

She died in July after suffering a broken hip. She’d become very sweet in her final months and I was glad to be at peace with her as Cheryl and I sat with her during her final hours. She was always afraid she might die alone, as her mother did. That didn’t happen. She never asked about any of her things, her furniture, her mementoes. She was in a very small place. When I closed her eyes for the last time, we took care of the necessary business, and I left the nursing home. Mom floated right out the door with me and I feel her in my house all the time. When you open the door to her bedroom, somehow the scent of her still wafts out through the walls, despite her being gone from that space for over four years. And her little sister is here, too. Although I don’t understand any of it. Which is ok.

One thought on “Braid”