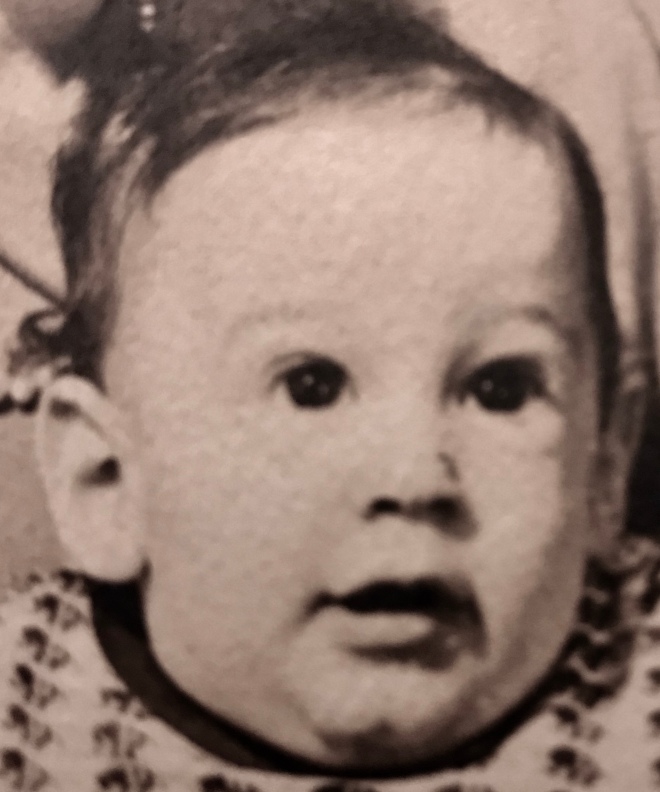 When you stop to think about it, birthday celebrations are a bit odd. Although somewhere deep in our brains, the passage from our mothers into the outside world is probably recorded, we don’t have easy access to that memorable entrance. In fact, most of us remember little from the first few years of life. And yet it seems to me that our earliest years are deeply significant, combining whatever is hardwired into our DNA, with the effects of how we are treated by our parents or caregivers. My own children, now in their thirties, routinely exhibit behaviors that are virtually the same as the ones from their babyhood. We are always growing, even during infancy, and by the time we are about five, certain basic feelings are locked into us, whether we can recall how they got there or not. 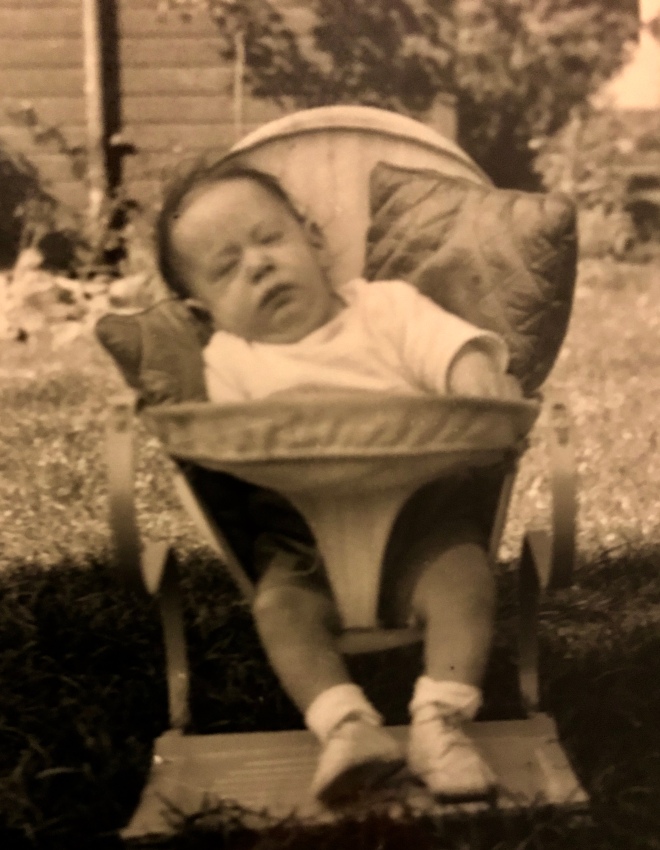 Today is Michael’s birthday, the second one since his death. This day finishes off the long list of anniversaries that punctuated the month of May. Father’s Day will be more challenging for my kids than for me. But his birthdate resonates with me. As I remember the many birthdays we spent together, I find myself thinking more about the little boy who was formed before I showed up. And that little boy was always present throughout our adult life, on birthdays and all other days as we maneuvered our way through life and its multitude of challenges. 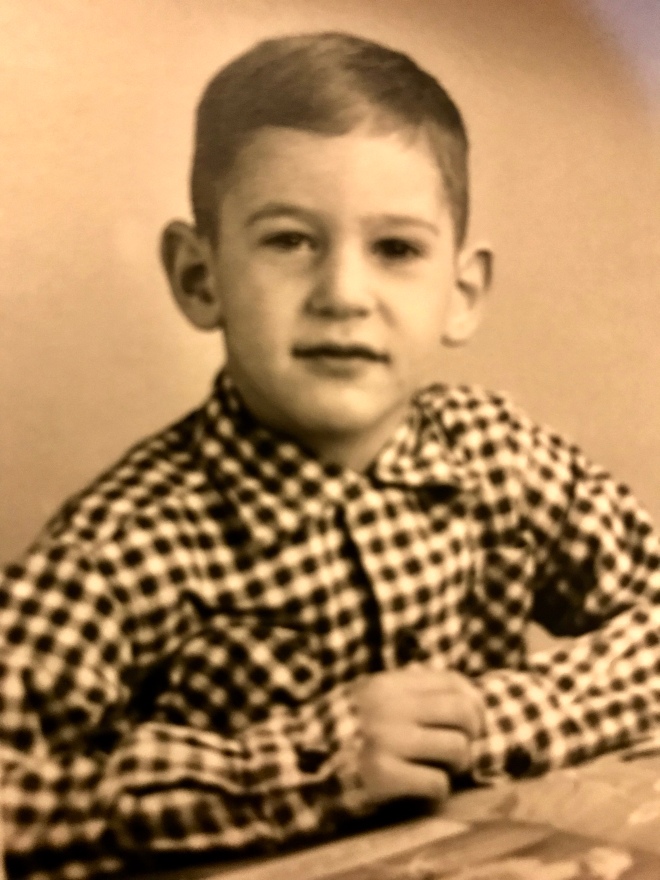 Michael’s parents were difficult people, hardly the types that were suited for nurturing children. They give credence to the concept of licensing couples before they reproduce. So much heartache could be avoided that way. But that isn’t likely to materialize any time soon. And for my sweet guy, he seemed like an alien, a mutant creature in the cold, insensitive environment that was his home life. 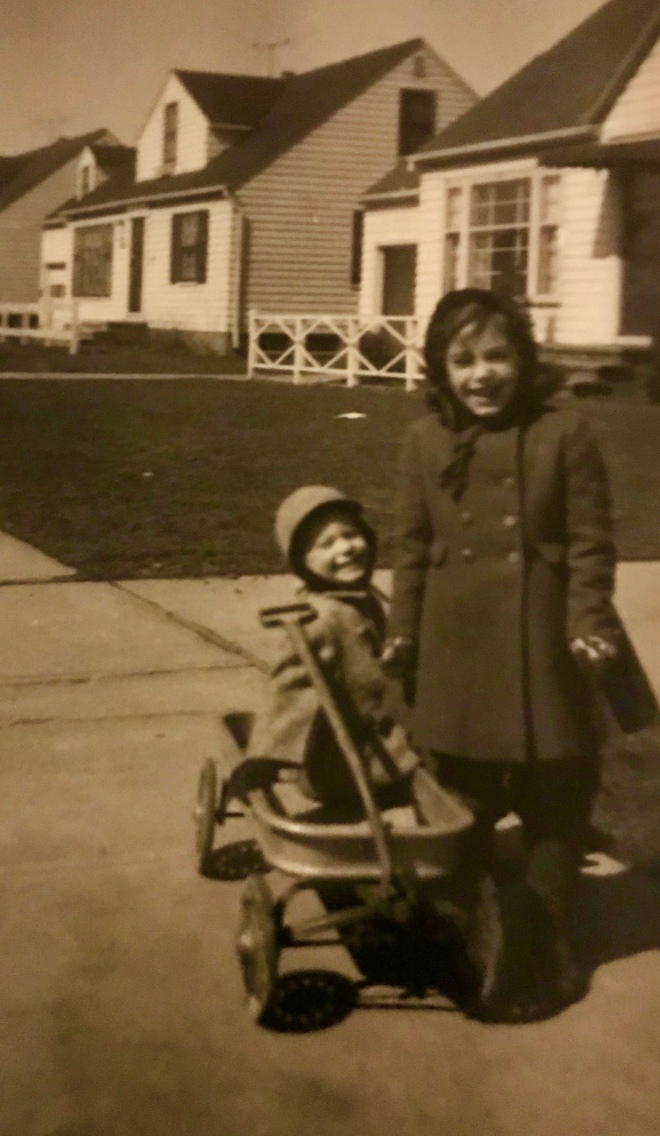 Michael had an older sister. Rather than beloved children I felt they were essentially perceived as two dimensional objects. I think their parents didn’t spend much time learning to know or help their kids. Rather, they hoped their children would grow up to reflect their own very clear values and choices, to become mini-versions of themselves. Their parental love was narcissistic. And putting a child’s needs ahead of their own was never part of their family code. 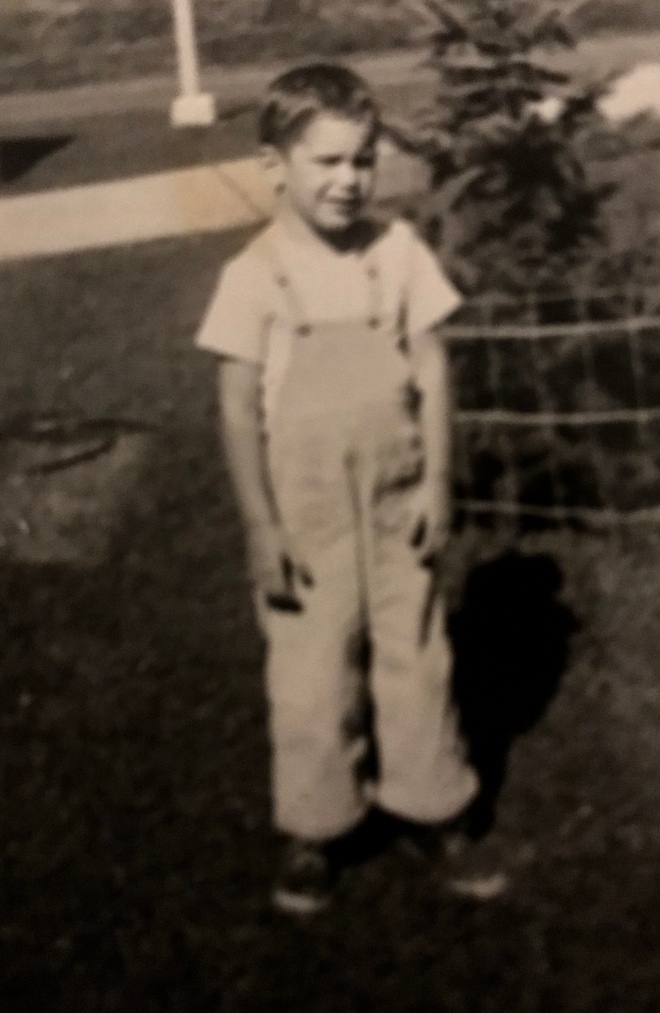 Michael’s earliest memory was from the vantage point of a 2 and a  half year old with pneumonia who’d been admitted to the hospital. His parents left him there by himself. He woke in the night and began wandering around, confused. The staff wound up putting him in restraints which he remembered for the rest of his life. Another one of his vivid memories was being a 5 year old child in Cleveland, who needed speech therapy to correct a lisp. He took the trolley by himself to his lessons with a note pinned to his coat with his personal information in case he got lost. I always found those two stories incomprehensible. 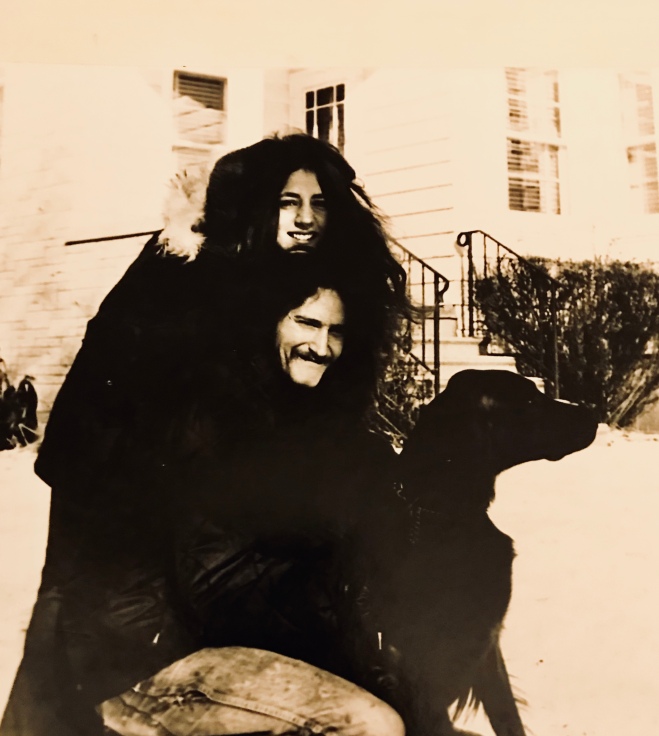 Michael told me that he’d actually escaped the worst of his parents’ attentions which were initially aimed at his sister in a full court press attempt to turn her into a stylish debutante. She had the wrong stuff. Michael did too. Both of them recognized from their earliest years that they were lacking whatever it was their parents wanted to see in them. And whatever was intrinsic to them didn’t resonate with their parents. Their most essential selves were unseen, not acknowledged, unvalued. That uncertain boy, lacking in confidence and self-deprecating to an absurd degree, came to me packaged as a strong, daring, talented man who seemed capable of anything. And he was sweet, perceptive and gentle. What could possibly go wrong? As we learned to know each other, I could feel that boyish uncertainty constantly gnawing at him. While I pushed forward, certain there was no situation I couldn’t think my way through, Michael hung back, passive and nervous about putting himself out there, about taking emotional risks or intellectual challenges. He’d jump from a cliff, ride a motorcycle without a helmet and hop rollercoasters until his head spun. But he moved slowly and cautiously in the things that mattered. I was stamping my feet at the finish line, waiting for him to catch up. Our differences in pace were memorable, me trying to yank him forward and him trying to hold his own space. Life was interesting indeed. 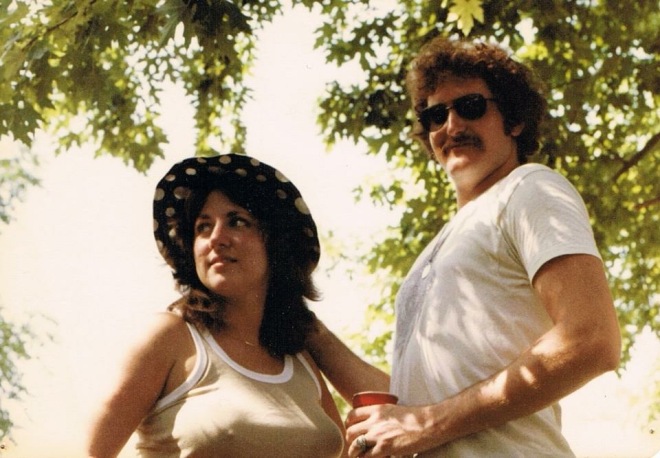 I tried to love him out of every insecurity that had taken root in him from the beginning of his life. He was intermittently grateful and annoyed. And I, despite being frequently frustrated, was madly in love with this sweet gifted man who’d been unfairly treated by those dreadful parents. After a long run of twenty years, I divested myself of my relationship with them. I couldn’t stand who they were or what they’d done. 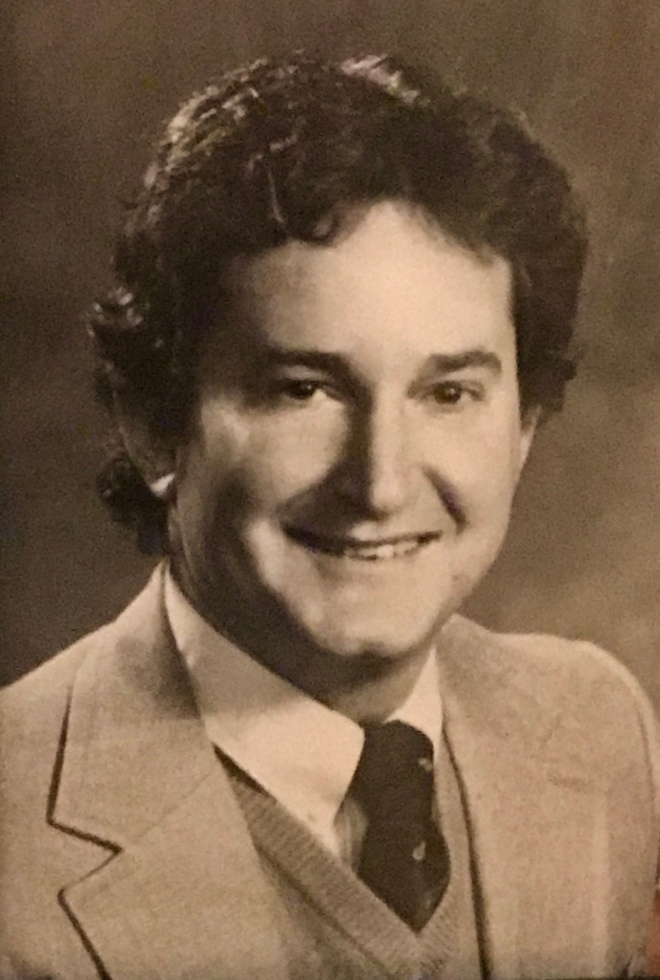 Michael and I moved forward together. In time, his confidence grew as he began to build first small successes and eventually the bigger ones that made him a fabulous public servant and a gifted teacher. And more important, he was a matchless husband and a devoted loving father. 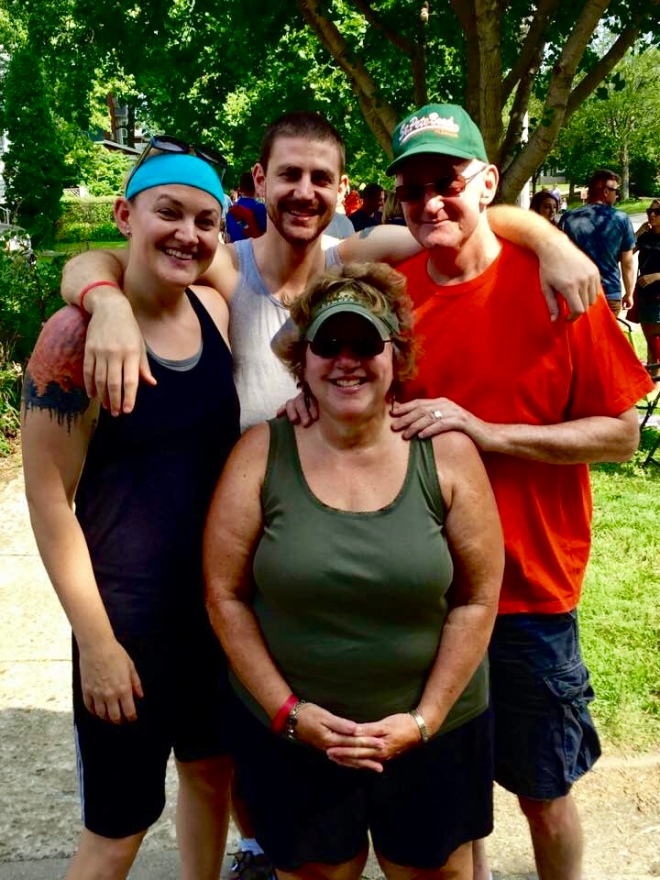 But periodically, the childhood demons emerged and he felt less than, not good enough. Over and over, throughout our years together, he’d ask, why are you even with me? It drove me crazy. 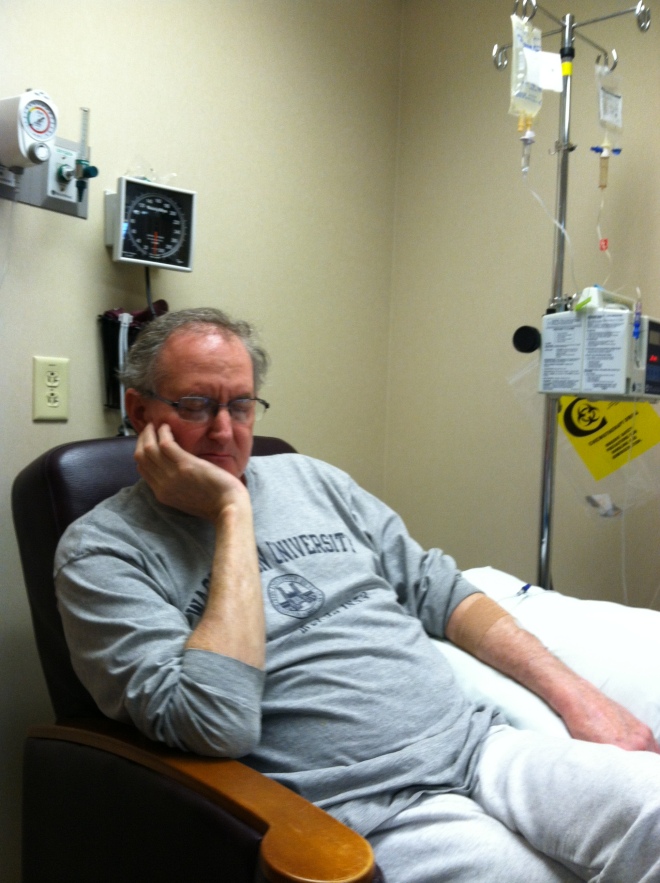 In 2012 we began the long road of his cancer experience. Many of the trivialities we indulged in were shunted off to the side as we faced months of tough treatment and uncertainty. Our feelings for each other deepened in intensity as we reveled in every moment we shared. Still, he would ask me why I bothered with him, when he could be so difficult. In 2014, he’d been through 2 surgeries, 30 radiation treatments and 18 rounds of a powerful chemo cocktail. His birthday that year had us hanging on the edge of an uncertain future. I was casting about for an appropriate gift and fretting over finding something meaningful, something significant. 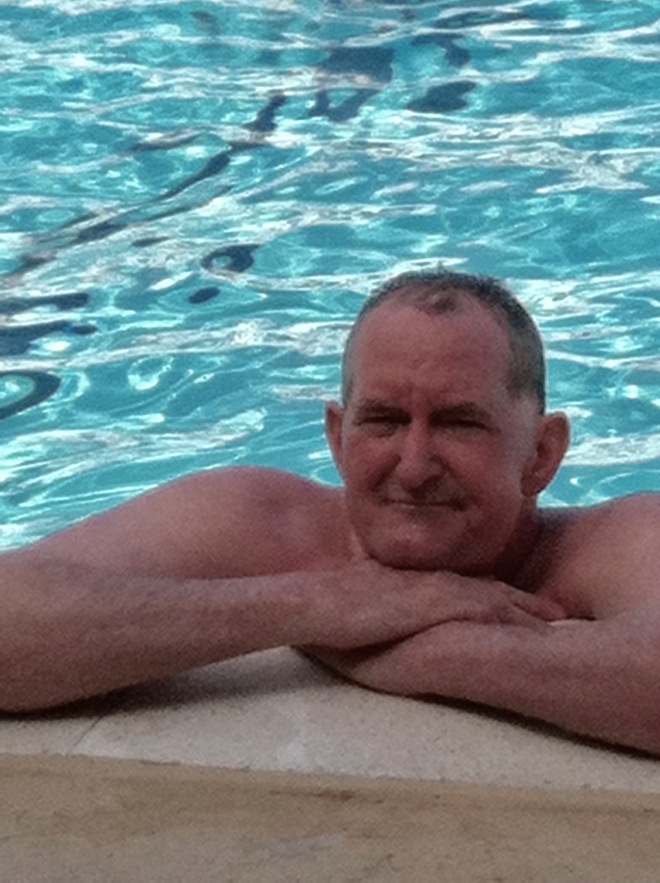 In the end, I wrote him what I hoped would be the penultimate answer to his endless insecure questioning of my loyalty to him. Here it is, as true for me today as it was when I wrote it 4 years ago, as true as it was for the many years before I wrote it and as true as it will be forever. Happy birthday, my darling boy, wherever your microbes or particles may float through the universe. Parts of you will always be with me.

Because you never tried to change me.

Because you were never threatened by my intelligence.

Because you always made me feel like I could do anything.

Because you forced me to do things I didn’t think I could do.

Because you stood up for me.

Because you always played on my team.

Because you made me feel beautiful no matter what.

Because you are a gorgeous, sexy beast.

Because you heard when I wasn’t talking.

Because you are my best friend.

Because you make me feel safe.

Because we made unbelievable children together.

Because you stayed hot for me our entire life together.

Because you tried to be a hero.

Because you know what’s fair and right.

Because you’d go to the wall for me.

Because we understand the world in the same way.

Because you love books and movies.

Because you’re a sap.

Because you make me crazy.

Because you’re my home.

Because you’re my best fit.

Because you hold my heart.

Because you are my always and forever. 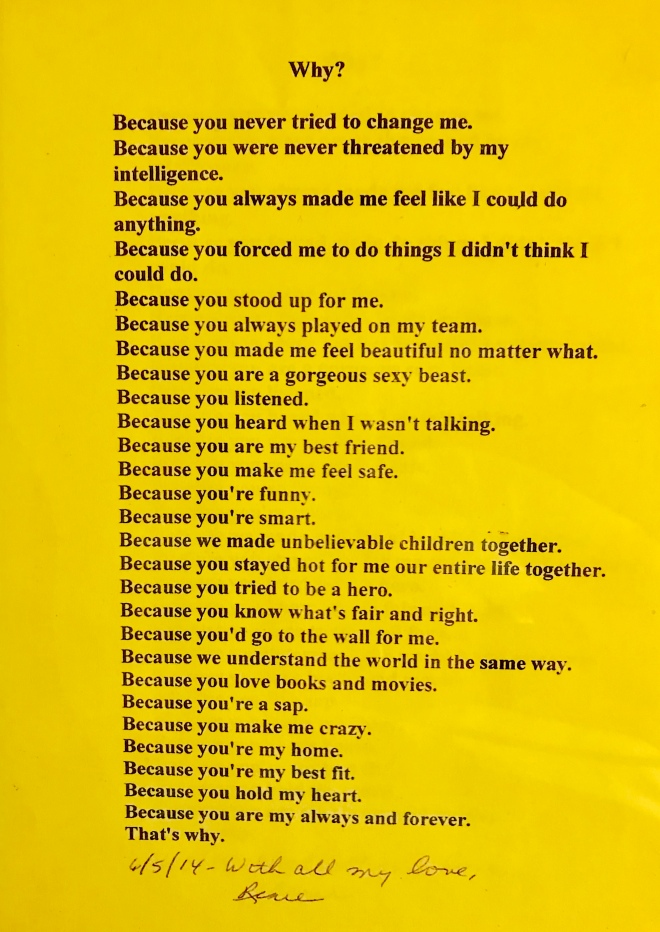