Today I was swimming along in my favorite pool, trying to shake off the long hours of driving from my two week long road trip. I did get exercise as I traveled, but my normal regimen was definitely disrupted as I often chose between sleep and workouts.  The older body and screaming left knee make different demands than the body of my youth. I am rushing to get back to optimum strength as my knee replacement surgery looms ahead in the beginning of July. Most people who’ve had both of their knees replaced tell me that their second one didn’t go as well as the first.

If that’s the way it goes for me, I’ll want to know I did everything I could to prevent anything less than success. Kind of my life operating principle. As a genuine control freak, I like to take out as many of the sabotage factors that I can before undertaking anything, while simultaneously knowing there’s only so much you can do. I’ve learned one thing from this year’s outdoor pool experiences. Prior to my first knee surgery I had to use the handicapped ramp to enter the water. This year, I can use the ladder with my one bionic right leg. The one with the titanium is also good for digging holes in the garden. It doesn’t feel like my body but it doesn’t hurt. Who knows? Maybe if all goes well, I’ll be using the high dive next summer. But looking back over my life, I haven’t done that since I was a kid in a healthy pre-acrophobic state. I don’t know how I acquired the fear of heights.  I’ve also been claustrophobic for as long as I can remember and don’t know why that happened either. I think about stuff like this as I swim my laps, up and back, up and back.

Sometimes I just find myself looking at Michael’s face as I cruise along. It kind of bobs in front of me, sort of like the head of the Cheshire Cat in Alice in Wonderland. But his smile is more crooked and a bit sardonic. I see his eyes and the way his hair would part as he emerged from below me, as he could swim a couple of lengths underwater, holding his breath for a long time. We spent a lot of time together in water, in pools, in lakes and in oceans.

Without fail, that apparition appears to me when I’m submerged and I feel happy and relaxed which is quite odd as he is definitely dead. I have no explanation for it. I appreciate the mystery for what it is, no more, no less. When I write stuff like this, I know that some people find it strange and uncomfortable. Others let me know that they have similar feelings, but they feel guilty about them, as if they haven’t done their grief due diligence, haven’t moved on enough, haven’t found new companionship. They think they’ve failed. When I think of them and how I am, I find myself thinking about boxes and closets.

Seems to me that too many people spend time feeling boxed in or closeted. I don’t like this. Why do people feel the need to organize others into understandable, identifiable places? So they don’t feel confused or out of order in some way?  This kind of categorizing has bothered me since I was quite young. There were the cool kids, the nice kids, the bad kids, the nerdy kids, the athletes and on and on. The weird people, the smart people, the phonies and posers, the outcasts and the in crowd. I hate all that. Now I spend time worrying about closeted celebrities who I read about and can’t understand why people can’t be who they are without fear. Why does anyone care about what anyone else does as long as it doesn’t put someone else in danger or at risk? So many inexplicable rules.

I try to understand what threatens people and I’m hard put to land on any reasonable explanations. I worked with a woman for many years, a woman who had a completely irrational hatred of lesbians. I would try to reason with her. She felt like every gay woman she met was interested in her. I asked her if she thought every straight man she met wanted her. When she said no, I tried to get her to see that there was no more reason to feel threatened by a lesbian than a man. But I’d get nowhere.

“Other” seems to be a problem for a lot of people. I spend hours trying to find anything that resembles logic in that alienation from anything other than sameness. But I always find that no matter how hard I try, there’s just nothing rational about the urge to be with “like.” I felt those compulsions when I was young because there was a time when fitting in felt critical to me,  as I think it does to most people for at least a certain part of their lives. When I left high school, I bolted away from the group mentality I ostensibly shared as a teenager and moved fast to establish my independence. I didn’t have to stretch very much to get there. The truth was I felt like I could “pass,” in the group scenarios but I always felt “other.” I didn’t want what my youthful friends wanted. I didn’t want to move in a pack. I always had trouble with the expectations of the crowd. Too much judgment, too many rules and my flight responses kicked into high gear. Being what other people expected of me was the last thing on my mind. I wanted to be what I expected of me and that was and is a lifelong occupation.

At this stage I certainly have a solid center and a coherent belief system. But I don’t want to be done. I don’t want to stay only in a comfortable zone for whatever time I have left. I want to see what else I’ve got. And I wish everyone could be in that same frame of mind. It’s easy to get pegged. Let’s see. I’m now the widow. I’m aging. Those two factors alone shove me into a pretty marginalized space. Except I don’t want to be in there. I know I have certain limitations.

But in the immortal words of Patrick Swayze in Dirty Dancing, “nobody puts baby in the corner.” I always want out. I don’t want to be predictable. My parents lived in Chicago for most of their adult lives and I think they ate at five restaurants. They astonished me. They lived small. I always wanted to live bigger. And it doesn’t have to be expensive or wildly adventurous. It just had to be outside the boxes that people seem to find themselves in without knowing exactly how they got there. Recently my son pointed out that he thought my behavior was unusual. 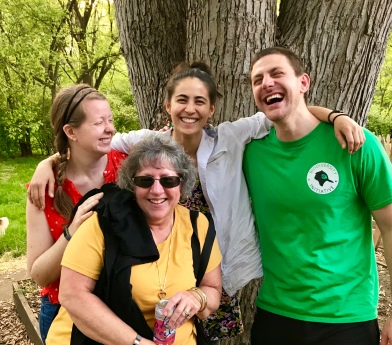 I’ve been getting tickets to see live rock and roll music, some shows out of town. We went to a Pete Yorn show and wound up spending the night with old friends of his from his teen years. Me and the kids. I got the best spare room and he had to sleep on the couch but it was really fine. I think they were ok with things and I was too. I surprised myself a bit, being willing to crash with the kids, but I couldn’t think of a reason to not do it other than it wasn’t typical. I suppose a hotel room would have been more the norm but the truth is, being around young people is energizing and interesting. I’d like everyone to step outside their closets and their boxes.

I know that some people only stay in them because of fear and anxiety. That makes me sad. I imagine what it could feel like if I just did the aging widow thing. To me, it’s not an attractive vision. Being alone is hard enough when it sometimes feels like everyone is either paired up, or trying to get that way. I think I’d become a genuine closet case if I lived in those narrow parameters.

So instead I’m hopping a train this Sunday for my solo trip to Glacier. I think this trip is going to work, unlike the previous two times I tried when the park burst into flames. I changed the travel season this time. Precisely my point. If the time frame isn’t working, better try a new one. Isn’t the definition of insanity to do the same useless thing over and over again? I’m trying to stay flexible, to adapt and to squeeze as much as I can get out of this life as I can. I’ve already had my future change when Michael died. Now I have to change it by myself. During the late sixties and seventies, one of my favorite slogans was “out of the closets and into the streets.” I think I’m going to stick with that one. I hope I can convince a few folks out there to bust out and pick a new way. With the boundaries you select instead of the ones thrust at you by someone else. Off I go. Surgery soon after.