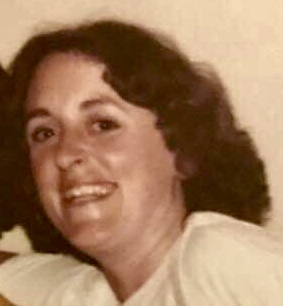 I have a beloved friend named Julie. I’ve been lucky enough to have kept her in my life for about 50 years. We met in college. We were part of the revolutionary days of the late ‘60’s and early 70’s. We were anti-war, pro-women’s and civil rights and profoundly anti-establishment and anti-patriarchy. Julie was a warrior-poet. Erudite, well-read, sardonic and bitingly funny, she was my kind of person. She had the courage to head a slate of candidates who were running for office as an alternative student government, with Julie as the chair. Everyone won but her. A more moderate male was elected to the spot which should rightfully have been hers. Hard times for women back then, despite some progress. Still hard times. I knew Julie before she married her husband Rich as she knew me before I married Michael. Today that seems almost as if we were friends in prehistoric times. 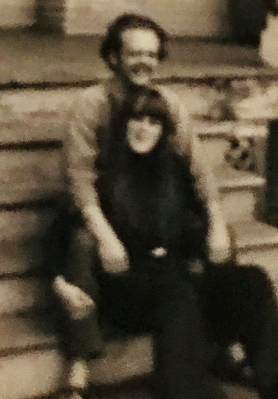 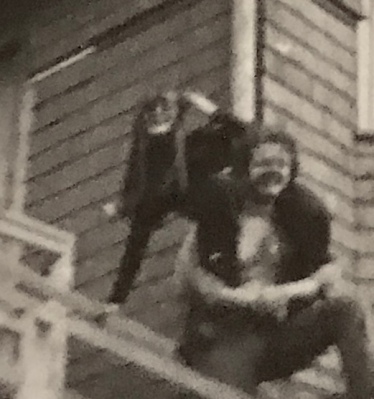 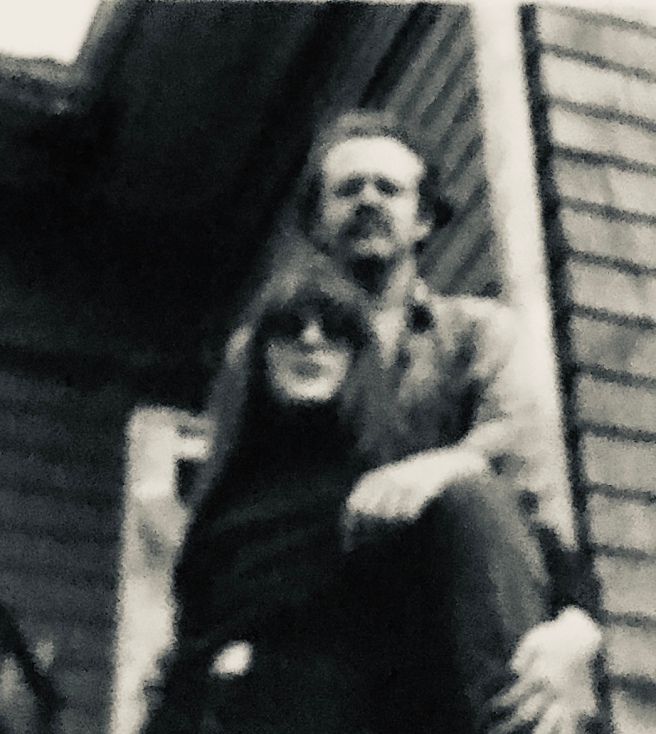 She was a few years older than me. I can’t find a couple of excellent photos of her from back in those days but I include a few blurry ones. She was very spirited and beautiful, along with all her intellectual firepower. Julie was a “townie,” born in the community where we both attended college. When she got involved with Rich who was a graduate student, she got a job and stayed in town while he was finishing his degree. They had a daughter who is few years older than mine. 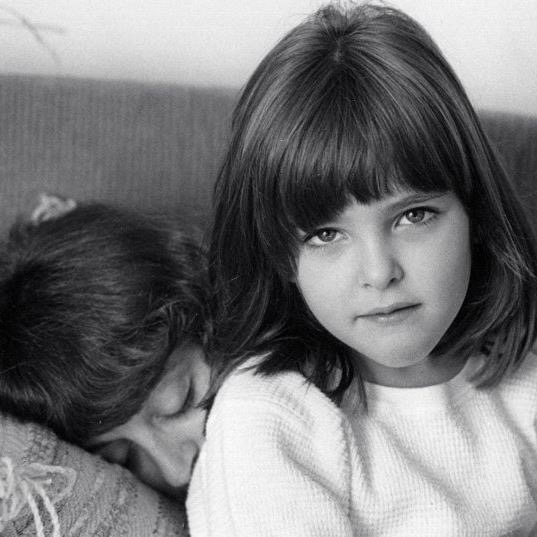 When many of our friends made the post-graduation exodus to Chicago, we still had each other and I felt lucky that our two daughters, a few years apart in age, played in the same houses together. Eventually, Rich got a job at a college in Kentucky and they packed up and moved away. We wrote, frequently at first, and then less so. But it didn’t really matter. When we got together, we had one of those easy relationships that picked up where it left off, without any difficult transitions. 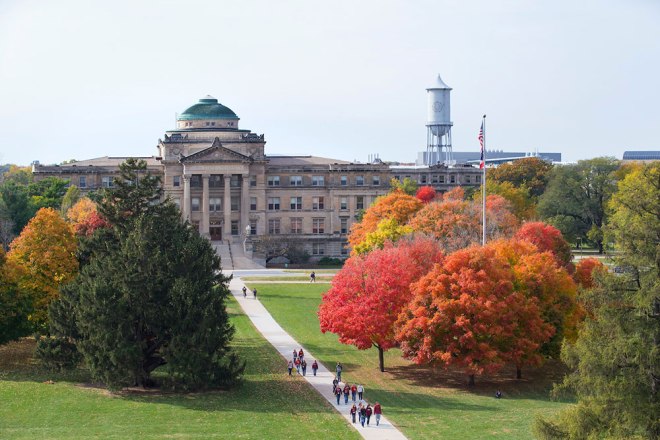 Eventually, they moved to Ames, Iowa where they still reside. They came back her to Julie’s hometown for visits. Eventually her dad died which was a big deal because he was a department head at the University. I remember going to the memorial service for him which was crowded and blurry because of all the attendees. But I was there. As years went by, Julie’s mom ultimately needed living assistance and Julie mover her to Ames. Visits home decreased. Still we managed to stay in touch. 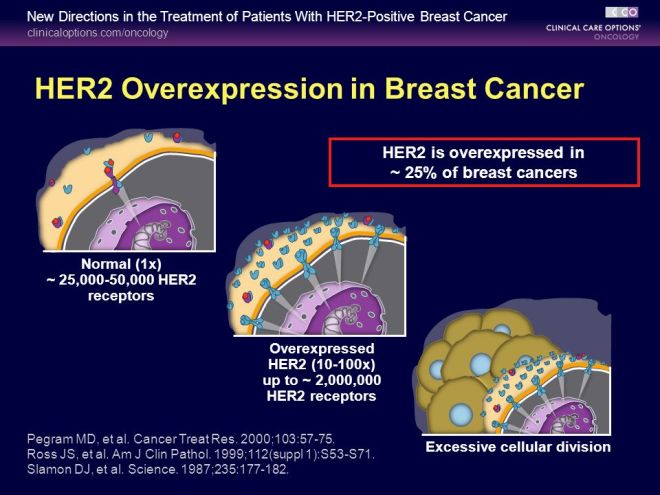 About 19 years ago, breast cancer showed up in Julie’s life at a pretty early age. It was one of the particularly nasty types, the Her-2 positive and she was blasted with treatment. She clawed her way through all of that and came out on the other side for which everyone was deeply grateful. But about three years ago, cancer reappeared in her liver, the same breast cancer as the earlier one with a slightly different mutation. How incredible that a cancer can lie dormant for almost seventeen years and then re-emerge in a new place and be so life-threatening. By that time, Michael had succumbed to his cancer and I was a free agent. Cancer can be such an isolating experience, I’d vowed to myself that I would make myself available to loved ones and friends who were going through treatments and hard times. 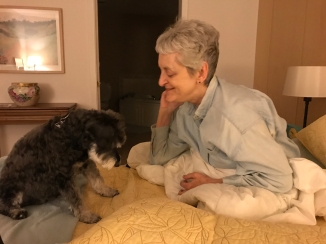 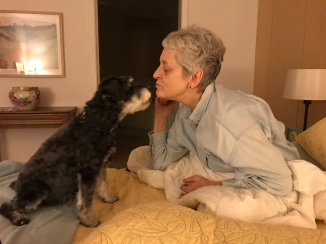 So I took off for Ames in fall of 2017 to spend some time with my old friends and give support and empathy in their difficult situation. We had a wonderful visit and although we were uncertain about how effective the treatments would be, I hoped that I’d see Julie again. And that’s exactly what happened. She outlived her prognosis and actually did well enough to make a visit back here last year. 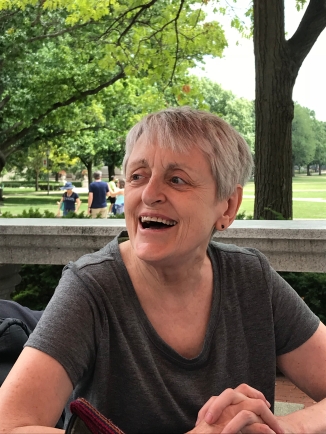 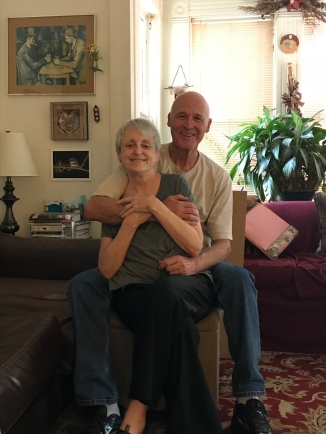 Other dear friends from Chicago joined us and we all were thrilled and hopeful that she would be one of those who’d beat the odds. She had such a good time that she talked about the possibility of moving back here and reestablishing a life in the town of her childhood. We continued to communicate and all seemed well. But suddenly things took a dark turn – the liver cancer metastasized and spread to her colon. An exploratory surgery unearthed too many bad spots and the only alternative was a “light” chemo, as if anything that toxic could actually be termed light. Her response was dreadful with her immune system getting hammered and making her vulnerable to virtually any opportunistic germ. Slowly she recovered from that. 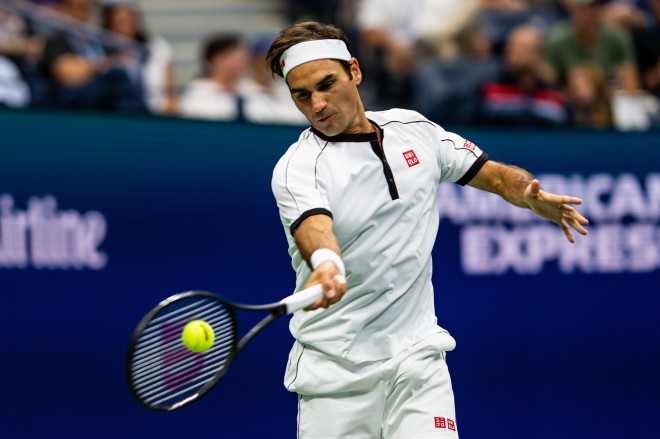 During the US Open, she and and Rich and I spoke before my personal favorite, Roger Federer’s match on a Tuesday evening. We were all pretty lighthearted. But the next day, Julie was having dreadful abdominal pain and was hospitalized. After scans and other tests, the doctors concluded that she had an intestinal obstruction which in the case of someone with her disease, was considered a death sentence. On September 7th, Rich sent out a note to family and friends saying that Julie had days to weeks to live and was being transferred to a hospice facility. He told people that if we wanted to plan a goodbye we were welcome to do that and transmitted a message from Julie expressing her gratitude for all the love she’d felt from all of us who’d been part of her life. 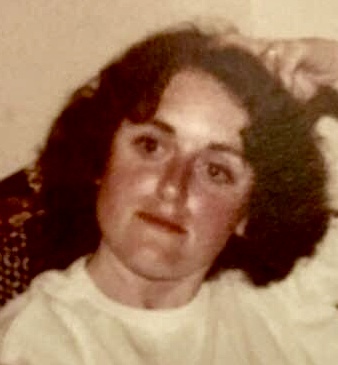 I sat stunned in my living room, not knowing what I should do. My knee replacement surgery was dull pretty recent and an hours long car ride with my leg bent seemed like a terrible idea. So I decided to send Rich a note with the request that he read it to Julie who was being treated for pain and being fed through nasogastric tubing. I wrote this on September 7th, the same day I got this dreadful news.

I have lain beside you in beds and on couches since we were so very young, when we were vulnerable and pained, and when we were angry and valiant, and  so “in your face,” assholes of the world. So I lay beside you now, in some ethereal form which should be wordless in reality, but is not in the case of you and me. I remember.

Hours of talking and sorting and handholding. Speaking of love and sadness and mysteries of this difficult world. Gales of laughter through the worst of times. The gifts of our language which we acquired on the journey of this life ring in my head. Julie the poet. I could listen to you for hours and you listened to me, a master of graffiti, as we found the right word that would resonate for whatever was the urgency of the moment.

I have not left you and you will not leave me. Whatever are the crevices that our bodies hold for those who come along and somehow wriggle into the fabric of our person is the place I am in you and the place you are in me. Even when we are converted to ash or dust, that space for each other was settled long ago. I wish you release from every type of pain. You’ve suffered better life’s challenges because your will came from a place of love. For as long as I am a corporeal being I will lift your banner and try to ease the pain of your dearest family. I treasure what we’ve been able to share in recent years, an affirmation of what is unbreakable and forever. I love you, Julie, for now and always. Thank you for being a gift in my life.

I thought this would be the last communication between me and my old friend and I was terribly sad. But as days went by, there were changes happening with Julie. She decided she wanted her feeding tube removed as it was interfering with her ability to feel close to people. That happened, and eventually, she progressed from a tiny amount of liquids to more solid food with no significant adverse effects. After days in hospice went by, she was able to have her IV pain meds replaced with other forms of delivery and got strong enough to get around without her walker. By September 23rd, Rich informed us that Julie was going into hospice at home where she could look at her own trees through her windows and have the comforts of her own space as she walks down the narrower road to end of life. 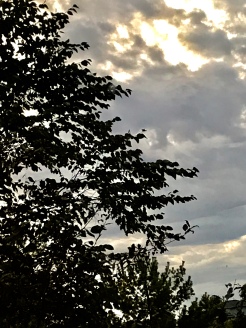 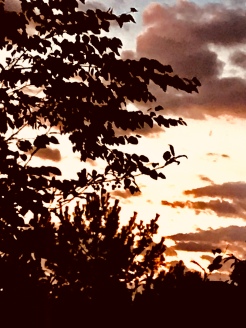 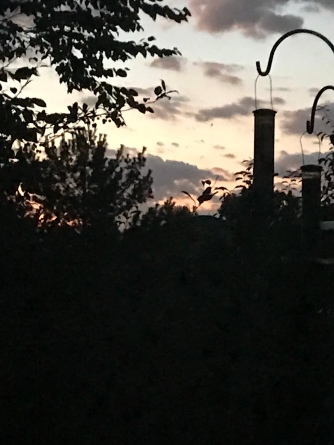 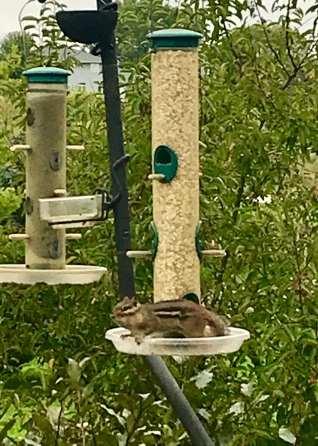 People were invited to visit and on September 26th, I felt good enough to climb in the car for a seven hour drive to see my friend. That was a longer trip than I expected due to construction and traffic and I worried that Julie might be too tired to relate to me. And sure enough, within about 45 minutes of my arrival, her eyes were closing. So I thought I would give her what I could in silence and darkness. I must have a peculiar pheromone, one that my family calls my special sleep “juju” that acts like a sedative on most people. I climbed in Julie’s bed and she put her pillows in my lap, snuggled under a blanket and allowed me to gently massage her until she passed out. And I sat there for about three hours sending my quiet love and empathy to her as she rested. 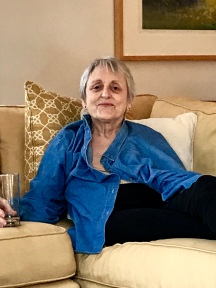 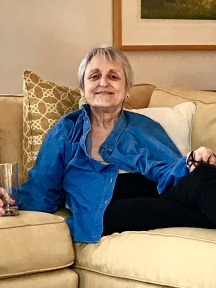 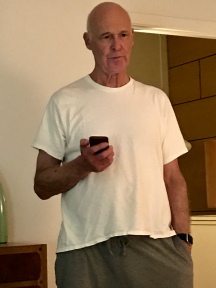 The next day she felt pretty well and between appointments with hospice people and her daughter coming over, we chatted and talked about everyday life, old memories, death, cancer and everything in between. I slipped out for awhile to have lunch on my own and give Rich and Julie some downtime and quiet space. I also wanted to find some sweets and fruit that the nurses were recommending for extra calories to provide strength. A lovely cafe with a bakery helped me feed myself and bring in treats that I hoped Julie would enjoy. We stayed up later last night, squeezing as much time in as we could get but everyone feared that the full time company could prove too exhausting and that she might totally crash today. But she felt better than she’d anticipated and we talked some more about the big ideas of life with a few light notes tossed in for fun. 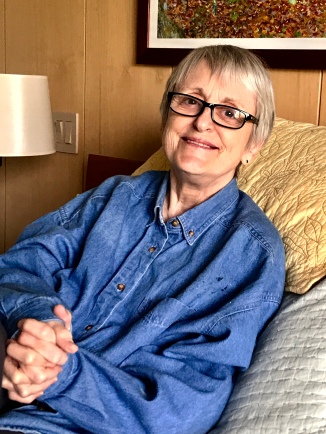 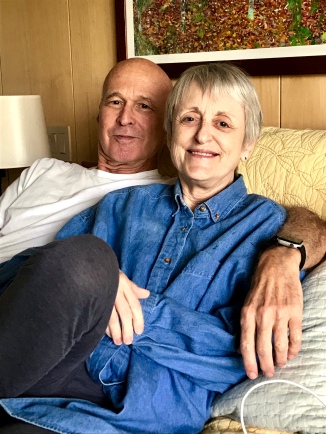 But then it was time to leave as I had a long drive ahead of me and Julie had the aspects of hospice that include visits. Time is a valuable commodity. So we had what might have been our final embrace. Julie is fragile but wept with strength while I held on to myself as I learned to do by all the practice I had in grieving Michael during his day by day decline. I have no idea how long Julie will stay alive or if I’ll have the chance to see her again. This time of my life, as is true for all of us who are aging, will be filled with losses. I feel as if chunks of my history are being carved out of the tapestry that winds out behind me. Of course I have the peculiar combined pain and gift of memory which I hope I retain as long as I’m alive. There’s doesn’t seem much point in being around if you know nothing of yourself. But for now, I hope that visiting Julie while she is still cognitive and aware was the gift I intended it to be. It was hard for me. I’m still too close to Michael’s death so I relive that time in moments like this. I’m not sorry I did it though. Love is love and love is pain and pain is love and all is a jumbled mess. At least that’s how I see it. 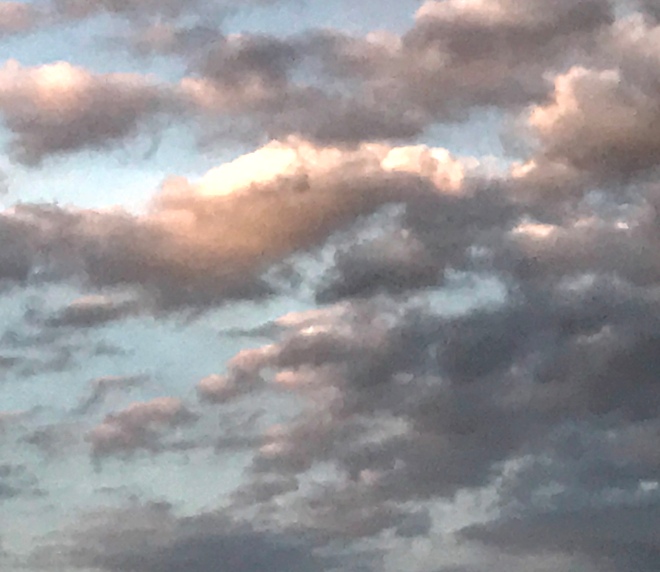 4 thoughts on “Julie and Farewells”