We returned home from our mini-vacation to prepare for what will define most of the summer of 2012, Michael’s radiation. After stepping out of our intense romantic bubble, we are now back on earth and realizing that we are still at the beginning of the cancer road. Home life is complicated. My elderly mother is living with us and as a cancer survivor herself, she is having a hard time understanding why we seem so dark about the future. After all, she is living proof that cancer is survivable. She isn’t remembering my dad’s barely four month bladder cancer experience, four months from diagnosis to death. This is partly due to her age and partly due to her feeling marginalized by the new situation. I realize that our well-intentioned cohabitation plan is going to change. I always thought I’d be able to keep my parents at home. But life is unpredictable and the choices aren’t good. 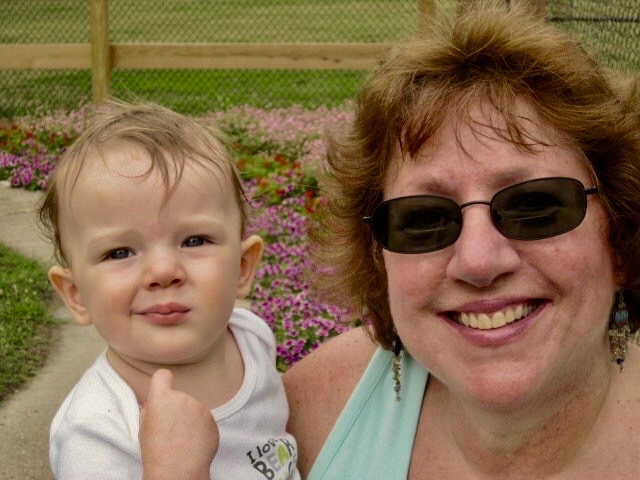 I’m also committed to caring for my baby grandson. He is a joy but also an economic necessity. I retired early to care for him, with that choice predicated on my kids’ paying my expensive COBRA health premiums instead of day care fees. I’d also taken an early retirement penalty on my pension. We felt like losing gamblers, which in essence, we were. Those were the practical daily life issues. Then there were the cancer ones. After our brief euphoria at being told there was a chance for Michael to survive MCC, we’d taken a step back and were soberly acknowledging that the survival rates for this monster were very low. Michael was girding himself for both the psychological and physical demands of his treatment. I was looking for a place to put myself and landed on the role of researcher. 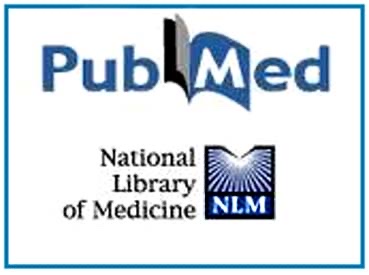 I decided to find out everything there was to know about this disease, in terms of how it operated and what was being done to treat it around the country and the world. I was lucky to be able to harness my intellectual capabilities and direct them toward science for the first time in my life. I started finding about recent studies and publications, along with new treatment approaches. So began our new life. Michael had to be prepared for his 30 rounds of radiation. He had to see his dentist to make sure his teeth and gums are in good shape as the treatment could weaken both. 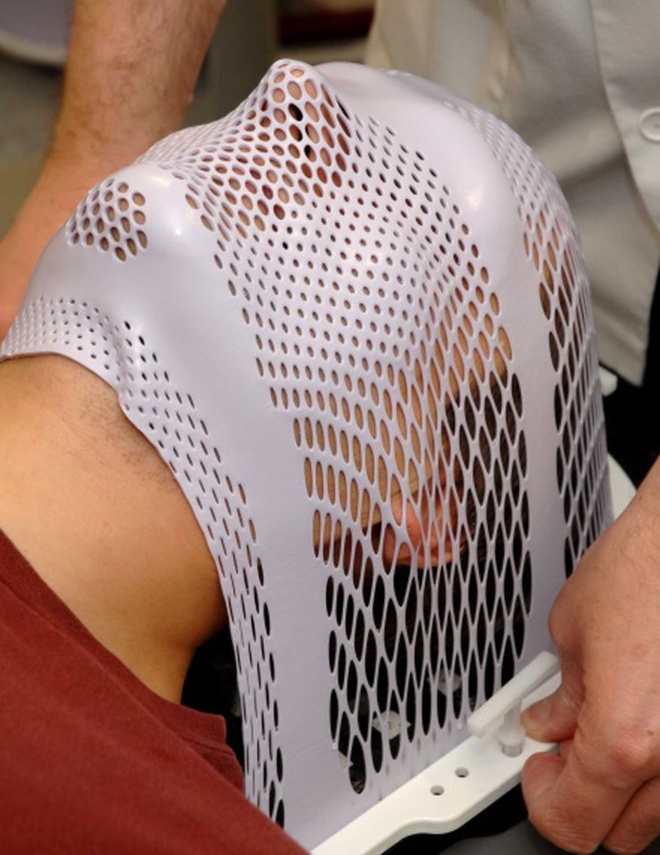 Then the first step for his process was the creation of a mask that is used for patients having radiation to the head and neck. A soft damp piece of mesh is laid over the whole head with holes left for comfortable breathing. After 15 minutes or so, the mesh hardens and molds to the face. Michael will wear this mask every time he has a treatment.

It will be bolted to the radiation table to ensure that he won’t move during treatment. As a claustrophobe, my body lurches in response to what will be a daily period of his life every day for 30 days. He will steel himself for it while in my mind, I’m thinking I couldn’t do this without sedation. Next there is simulation. We’ve learned that the radiation oncologist is flanked by a team of physicists and techno geniuses who devise a mathematical three dimensional field that directs the radiation rays to very specific targets while sparing as much normal tissue as possible.

We get to see the plan which resembles a blueprint and are then handed a schedule for the next six weeks. And so it begins. For the first two weeks, things go along without much noticeable change in Michael. Then fatigue begins to assert itself. Naps resolve that initially. But soon more symptoms emerge. Michael has lost a major salivary gland and sixty six lymph nodes. The radiation is frying the area where all that surgery took place. His saliva begins to thicken and become ropey. Swallowing becomes more difficult. His taste changes and his appetite begins to diminish. That means more exhaustion. I’ve been finding different supplements which are being used in clinical trials to support the body’s immune system while being treated for cancer. Soon Michael is taking an array of them which include mushroom compounds, herbs and vitamins. The oncologists have no objection to these. I begin to think that there is so much vagary in cancer treatment that unless you ask about adding cigarettes as an adjunct therapy, they figure anything is worth a try. There’s a definite psychological advantage in feeling proactive and although Michael grumbles about the number of pills he’s swallowing daily, I think he feels, along with me, that we want no stone unturned in our efforts to support his life.

We try to do normal things. We go to the movies and spend time with our family and friends. That gets harder as his interest in food dwindles. We both become keenly aware that so much socializing takes place around meals. A sense of isolation sets in. This will be an issue I have to contend with for a long time. Michael is friendly but is not intimate with many people. I always tended to be more social but have already made the decision to stay glued to Michael’s side. I’m already down the road imagining his absence. I don’t intend to have any regrets about being away from him while he’s on this planet. We are lucky to have spent decades together and to still be powerfully attracted to each other. We stay intimate. The connection helps us both stay grounded in the midst of all the fear and uncertainty. Michael starts losing weight. His bloodwork looks dicey and we discover that he has an inadequate platelet problem that was occult until this illness occurred. More worries.

Then the more severe responses to radiation begin. Michael’s  tongue and mouth are sore. An apothecary in a small town nearby compounds a rinse called Miracle Mouth which soothes some of the burning. Sometimes it helps and sometimes it doesn’t. Then his skin begins to burn, blister and peel. Necrosis sets in which you can identify by the discoloration which takes place. The colors range from dark red to a sickly green and the skin peels. Moisturizers are supplied but the fact is that the visual manifestation of the treatment indicates what’s happening internally which is the desired goal. Normally, I’m not a weepy person but one morning, I was passing by our bathroom and the door was partially open. I saw Michael carefully trying to clean his face, gingerly patting his cheek and trying to carefully remove the dead strands literally falling off in his hands. I went around the corner and cried. Watching him in this altered capacity hurt me. And the helpless feelings that went along with it were hard to bear.

While we coped with all these changes there were other unexpected surprises. Looking back, l can’t say why they were unexpected. Radiation equipment is just that – equipment. And as with any other type of equipment, shit happens. Michael would have an appointment scheduled for one o’clock in the afternoon. At 12:15, he’d receive a phone call telling him that his machine was down and that the technician who could fix it was out of town and that the day’s treatment was canceled. Frustrating, but not much we could do about it. On one of those days, we went off to a big box store as our refrigerator had decided to reach the end of its unnatural life. While trying to make a choice about which new appliance might have a shot at lasting more than a few years, Michael’s cell phone rang. The technician had managed to repair the machine and could he get there in ten minutes to complete the day’s treatment? At that moment, our son- in-law miraculously appeared in the store so Michael ran off as quickly as possible to try to stay on track with his treatment plan. That happened several times, tossing additional anxious moments at us during our life’s most anxious time. There was no one to blame – a few minutes of shouting and swearing had to be enough to release our tension.

Eventually, the six weeks of radiation ended on July 27th, 2012. Michael was thin, tired, sore and grouchy. To get stronger, to get back to exercising and back to teaching which was due to begin in mid-August, he needed nutrition but was having a hard time eating. I remember a big family barbecue at our daughter’s house, watching him select what in a normal time would’ve been a good sized portion of food. But he couldn’t manage it. In the midst of the babble of voices in the room, I could feel his irritation and feel his feelings while I pretended to be normal. He went home early and I joined him soon after he left. I was worried about the stress of a new school year and was trying to talk him into taking a little more time off. But Michael was determined to go back.

He’d come to teaching in his early fifties after spending 27 years co-owning a music business which brought us great fun and lots of stress as music became available over the internet and CD’s were cheaper in big box stores like Best Buy. When Michael went back to school to  become a teacher and ultimately got his master’s degree in the teaching of US History, he’d found his true vocation. He didn’t want to miss a minute of it and most particularly, a class he’d designed himself, Modern American History through Film and Music. I was thinking a lot about the importance of living in the moment, learning to waste no time, to make all our moments count. So despite my fears, I decided to support Michael’s decision to go back to work. He was mentally strong, stubborn and proud, the same person I’d been with my whole life, before MCC changed our lives. So off he went. He’d begin his every three month exams soon and would have a PET/CAT scan in November to see if it appeared that the cancer had been eradicated by the surgeries and radiation.

We were looking for normal and determined to find it wherever we could. Michael and I each went to school, he to teach and me to my new obsession, becoming more knowledgeable about his evil mutation. We were in tandem and moving forward.