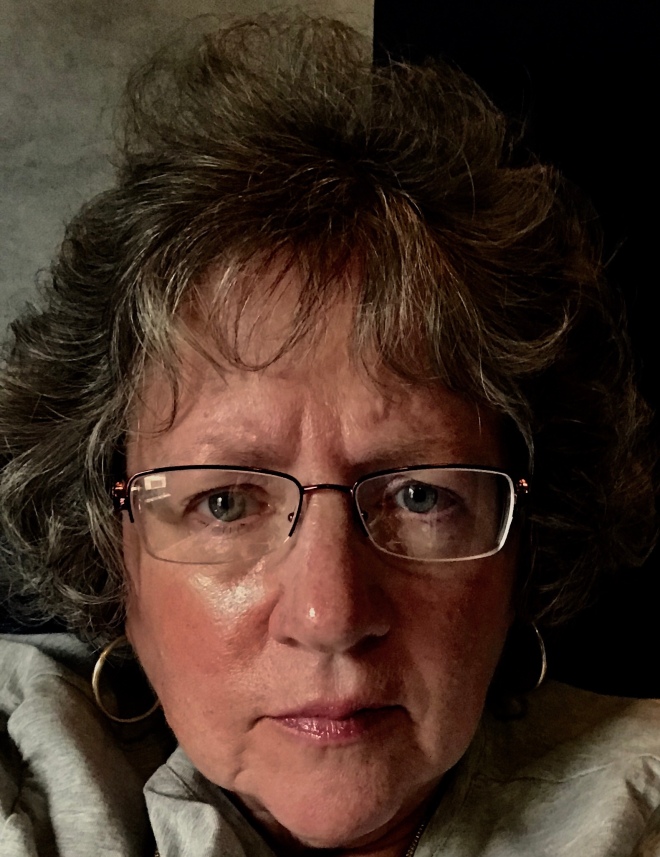 Sometimes writing means wrangling with yourself. There’s what you feel. And then there’s what you think about what you feel. At least that’s how it works for me. I spend time doing critical evaluation of what’s going on inside me. I want to make sure I don’t lose sight of my place in the universe. For the most part, I remind myself that I have first world problems. Compared to millions of people on this planet, my life is easy and filled with countless riches. I hope I always stay aware of this fundamental truth. That said, I still, like most humans, concentrate on the minutiae of my daily life, both the bad and the good. And then there’s the bigger, deeper part of me that is more complex and existential. First, the annoying parts… 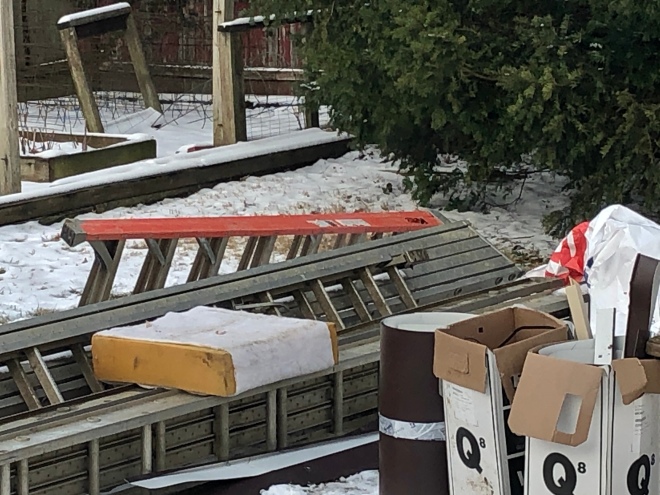 The beginning of 2020 was not what I’d call an auspicious start to a new decade. In dreary January, five months after signing a contract to have my house sided, workers showed up, unannounced, and barreled into my yard with piles of equipment and materials. They surrounded my lot with yellow crime tape and signs warning of hazardous waste. Despite the fearful cautions, they regularly smoked cigarettes right next to their signs, adding a quality of dissonance to their sudden arrival.

For the homeowner, dealing with contractors usually means acquiring an unwanted anecdote catalog of disagreements about lateness, sloppiness, misunderstood expectations and frustration. My experience covered all those conflicts. They barged into my life with a proprietary attitude  , tramping around, making messes, destroying my yard and banging away at my sensibilities for eight hours a day. An air compressor below my bedroom window rumbled every fifteen minutes while a boom box blaring music played constantly, even when they were away on lunch break. They kept the gate to my backyard open, making it impossible for me to let my dog out. I realized that until they were finished, my life during the day was not my own. That situation became especially challenging when I developed the flu. Chills, aches and fever chained me to the house with the incessant bang-bang-banging of hammers the theme song for my misery. I never expected the siding people to show up during the winter – mustering up the energy to direct them, answer questions and argue felt like a lot. I wondered why I’d even bothered to get involved with a big project like siding my monstrous old house at this stage of my life. The money I was spending could buy some amazing experiences which mean a lot more to me than stuff does. I’m trying to remember that come spring, when I’m working in the garden, I’ll be glad I’m not seeing all the broken shingles and stains which pushed me to do this work. My house is what I’ll leave for my kids and once I get past this event, I’ll be glad it’s done. 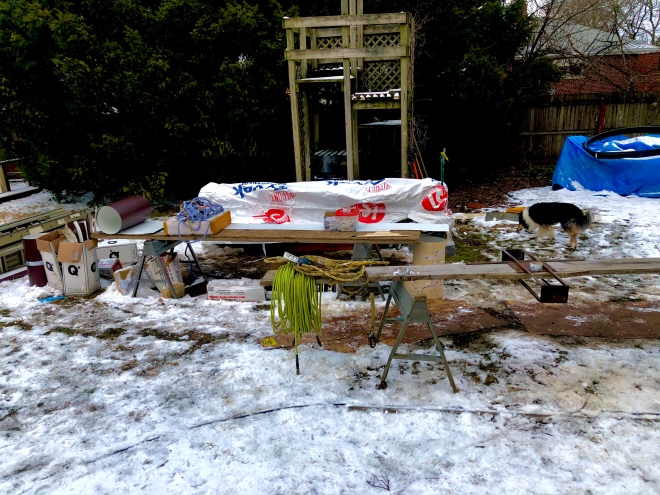 So the flu and the construction left me muddled which in turn made me more uncomfortable. I’m used to managing myself well. But events have been wearing on me. Instead of feeling decisive, I’ve been indefinite, clouded. Politics have been frustrating. I’m disgruntled about winding up with two old white men in the Democratic run for the presidency. I’ll vote for whoever gets the nomination but I’m thinking that I won’t live long enough to see a woman president. As I mull over my life journey, that is a huge disappointment. Next, my go-to distraction, watching Roger Federer play tennis, was stripped away due to an injury which required him to have knee surgery. I’ve been aware for a long time that he’s approaching the end of his career. But I wasn’t prepared for an abrupt change. I’ll admit, depending on an athlete for pleasure and sustenance is pretty impractical. I hope he has a little more time left to come back and play. But clearly I need to adjust and find some new resources.

Then there is this new coronavirus. Suddenly I find myself in the age group which is most vulnerable to this vague illness. I suppose that after how terrible I felt with my flu experience, my apprehension about a new threat is elevated. Is this alien sense of being less capable and more threatened an age thing? Or is it something else? I was supposed to take a trip to Florida to spend some time with old friends. As I was tying up the last parts of the siding job, I was carefully watching the weather forecast. I was supposed to be taking a bus to the airport in Chicago. A storm popped up which was scheduled to hit smack in the middle of my ride to the city, bringing snow and blustery conditions which made flight cancellations likely. I wavered between leaving on my planned date and delaying for a bit. After days of uncertainty, I finally chose to delay. Again, the indecisiveness was rattling for me.

I finally pushed my anxiety aside, grabbed a packet of anti-bacterial wipes and hand sanitizer and boarded a bus which would get me to Midway airport and my flight south. A bus ride provides a good thinking place, especially in the Midwest where there’s lots of space to absorb your thoughts and feelings. 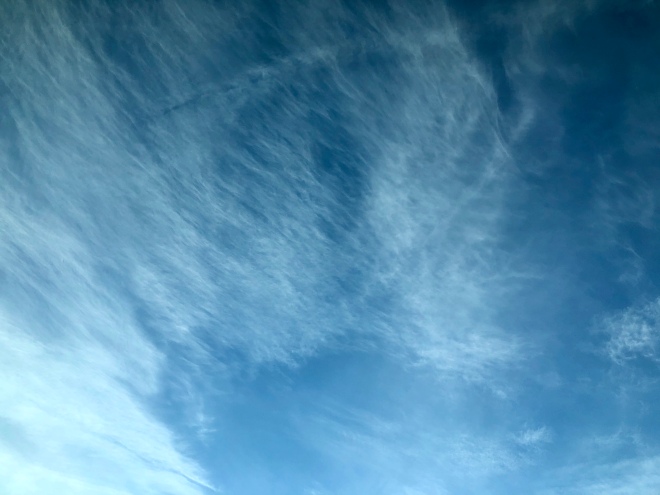 I puzzled over how different I felt from my usual self. I was pretty convinced that getting thrown off my usual pace by the flu had forced me into a deeply reflective mindset, the kind that generally are precipitated by life-altering events. I’d certainly had my share of those. Up to this point I’d rolled straight through all of them, including Michael’s death. I still remember that within thirty minutes of my writing his oncologist to tell her he’d died, she called me to say I was now at the highest risk of death I’d ever been in my life. She said that the kind of caregiving I’d done had worn me down, that for the next six months I should do nothing but sleep, eat and exercise. That was thirty three months ago. Obviously I didn’t die. Until I got sick in February I’d just been moving forward, living the best version of my days. Stopping cold threw me into this funk.

But the truth is, the funk has been a companion I’ve been able to set aside for the most part. The funk is about the absence of my life’s partner. I’m so over the novelty of his being gone. Yeah, I can do it all. I’ve always been able to do things. I didn’t live in one of those marriages where the male dominated in any way. In fact, our big joke was Michael saying things like, “how about if I’m the guy tonight,” when we went out to dinner. When we went places, including our longest road trips, I drove 90% of the time. Yeah, I can do stuff. My contractor told me I was a force to be reckoned with. But for me, it’s mostly just being alone for everything. Being sick alone. Arguing with contractors alone. Making all the   decisions about everything alone. And it isn’t just “alone.” I have great kids who care about me. They offer help. But they’re not my partner. I won’t have another partner. I have no interest in a new companion. My relationship with Michael was a one time deal. We started out with each other as young kids. We were fortunate enough to stay together until what I thought was the beginning of old age. The dissonance of feeling so much older right now , as I head toward the completion of seven decades on earth, with the part of me that feels too young to be a widow, is not lost on me. Everything doesn’t have to be logical. 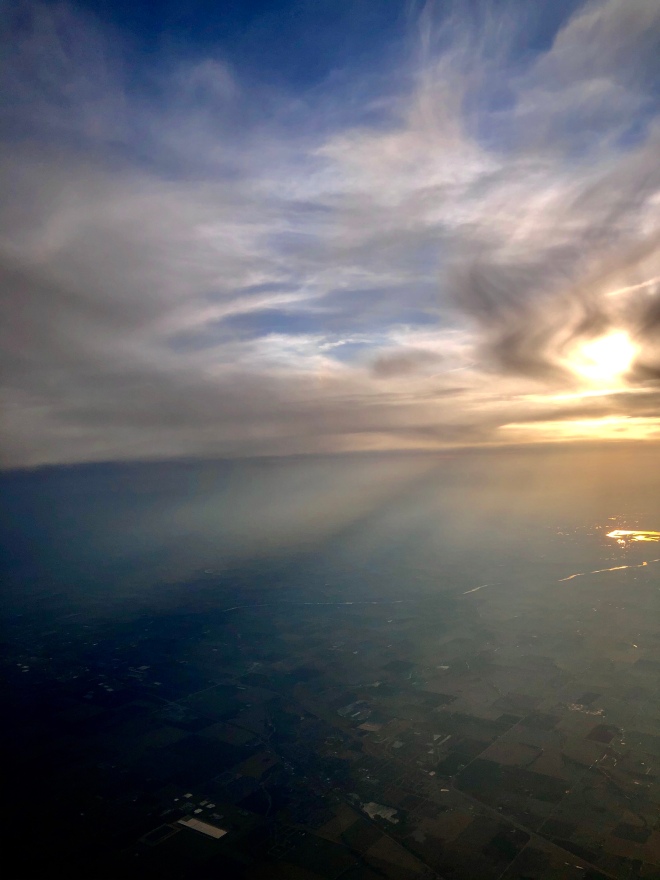 So I’m flying to one of our favorite places where we spent many magical times, the Gulf Coast of Florida. And I’m recognizing that underlying my new muddled state and my anxiety is the simple fact that I’m in my thirty-third month of grief and mourning. I didn’t know that I would feel this way. During the harried years of trying to help Michael stay alive, I thought about what my future would be like when he was gone. But you can’t really anticipate what will be absent no matter how honest you are about your emotions. When Michael asked me what I was going to do when he died, I would say, “I have no clue.” I meant that. I didn’t know I would still be in love with a dead person. Nor did I understand the fatigue of being the place where the buck always stops. But there it is. The fact of the matter, or at least my matter. 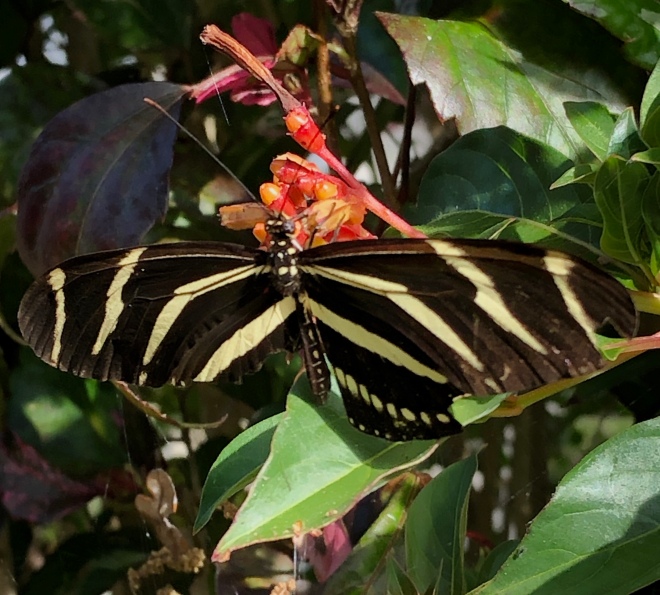 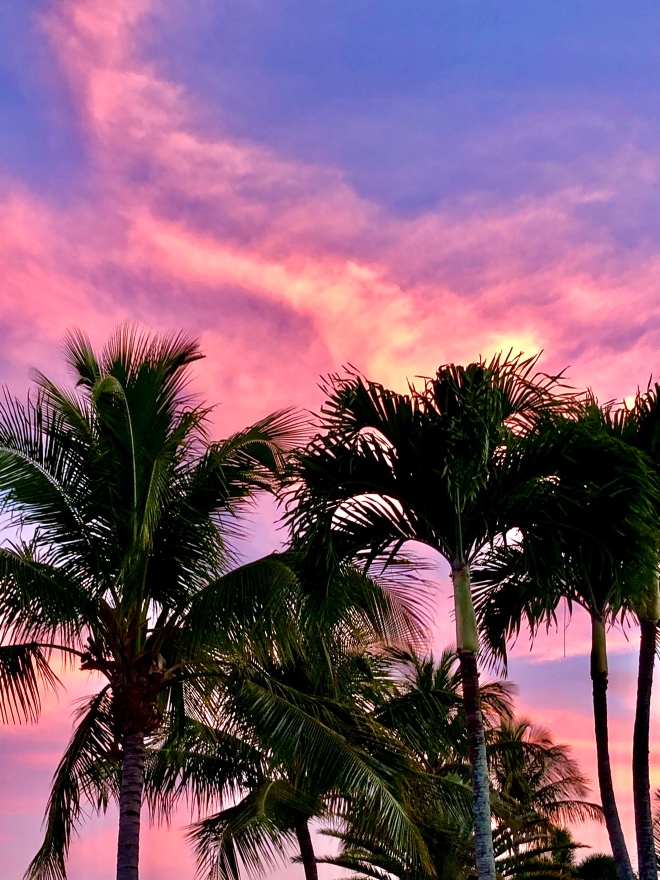 I arrived at the Gulf tired but relieved. I’m relieved that I have a better understanding of my bumpy start to 2020. I’m far from the only one with issues. All around me are people coping with multiple problems like cancer, troubled kids, joblessness and finances. Now there appears to be a global pandemic. What will the outcomes be for so many who are simply going about their daily lives? In my country, a convulsive political campaign will proceed until the election finally arrives in November. The consequences of that alone have huge implications for the world. I shudder at the possibility of this seemingly endless presidency which has cast a dystopic shadow over my life, from the beginning of Michael’s decline to his death and beyond. 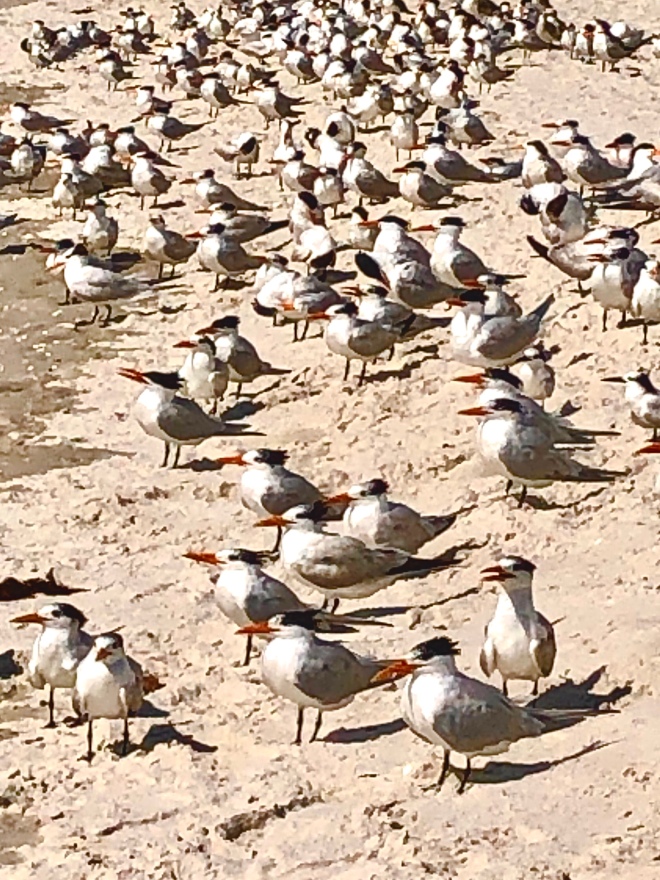 I’ve been fortunate enough to walk on the beach, steady now instead of wobbly, my two new knees making life so much easier for me than it was for many painful years. Michael inhabits me in ways that are hard to describe, ghostly yet often palpable. I still write him letters although no longer every day. There are countless times that I want to send him texts or call him on the phone. And there are others when all that seems unnecessary because for me, he still just is. On this trip where I stay with friends who knew us both when we were so very young, he is a frequent topic of conversation which is incredibly relieving for me. Here, no one thinks I’m weird, or at least weird because he is still such a central person for me. I do what we’d do together. I collect my shells and marvel at the beauty of the water and the wildlife. My photo of my foot in the Gulf looks lonely because we used to put our feet side by side in those pictures. 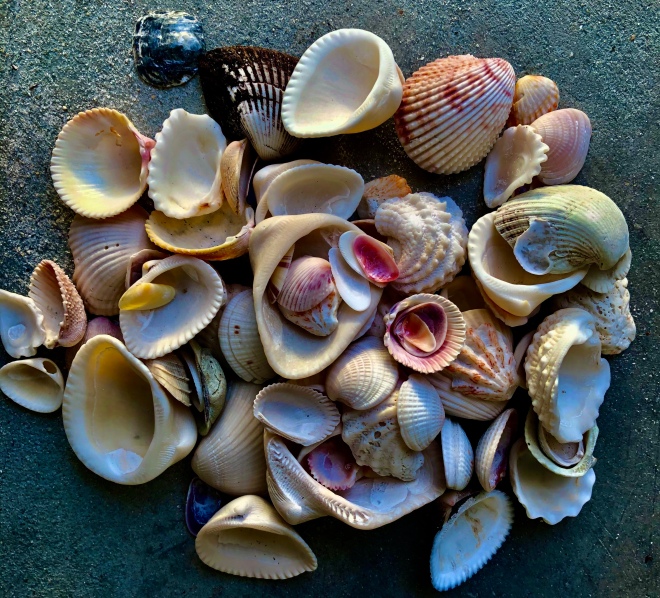 I know that my life will never feel as rich and deep as it did when Michael was next to me. But I also know that I’m able to have pleasure, to intermittently escape the endless sense of responsibility for decision-making that feels like such a load when there is no one to share it. In my mind, I lay my head on his shoulder and talk about anything that crosses my mind. In my thirty- third month, I still feel frustration and anger that I was robbed of best friend, my solace, my comfort. I don’t know if anything will get easier as time goes by. Who knows? In the meantime, I’m going to try to be patient with my evolving older self. I’m doing my best. I need to figure out that my best is enough. 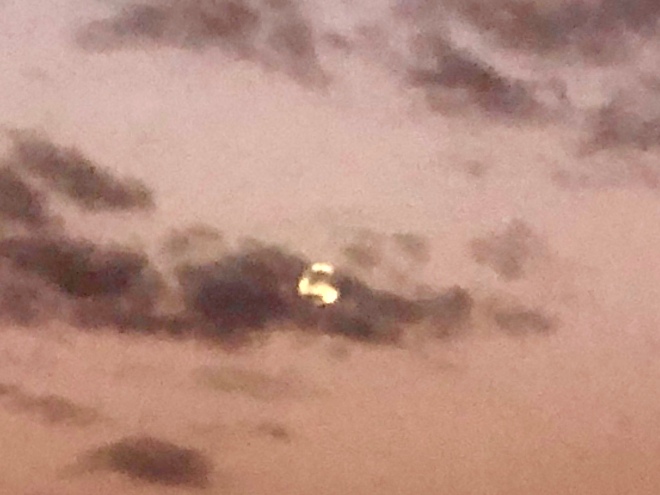