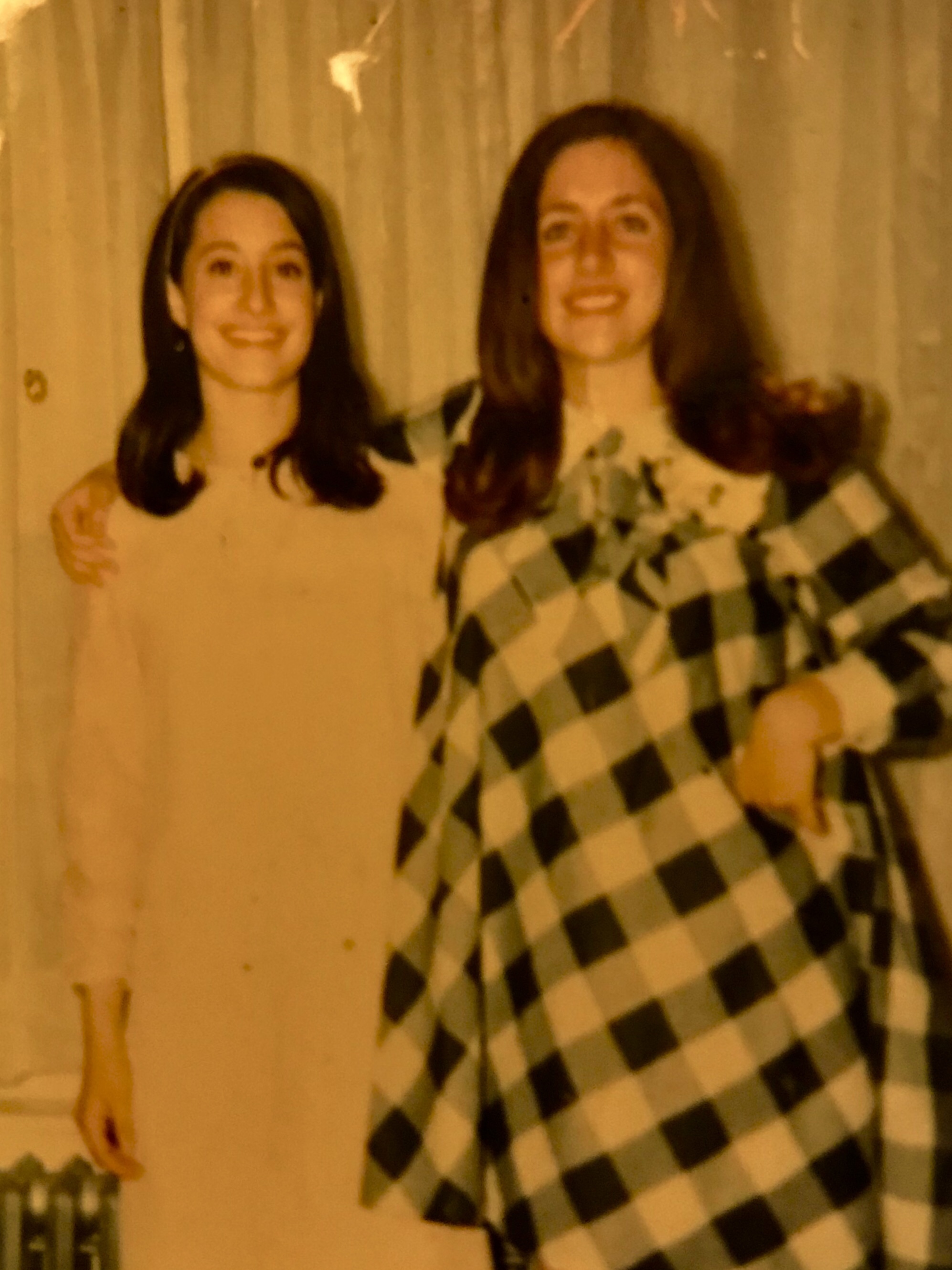 March 20th. Well over five decades ago, my friend Fern and I designated this date as a celebratory anniversary, a day when we acknowledged who we loved, who we thought we’d love forever. Of course we shared the date with each other, rather than with those long ago boys, because somewhere in the back of our minds, we knew we’d be more likely to have each other as time went by instead of them. So smart we were, so prescient. We did have each other, for another twenty five years or so, until Fern’s lifelong demons finally overran her when she ended her life at only 37 years of age. I’ve carried on in her absence, now having lived longer without her than I lived with her. What an impossibly strange concept. I still haven’t forgotten so much that lay between us, brilliantly vivid and exquisitely alive memories so real that I can’t fathom I’ve come all this way, experiencing so much that we weren’t able to share. We were supposed to sit in rocking chairs together when we’d grown old, harmonizing to Beatles’ songs, me doing Paul’s parts while she did John’s. I hate the reality of how life worked out. 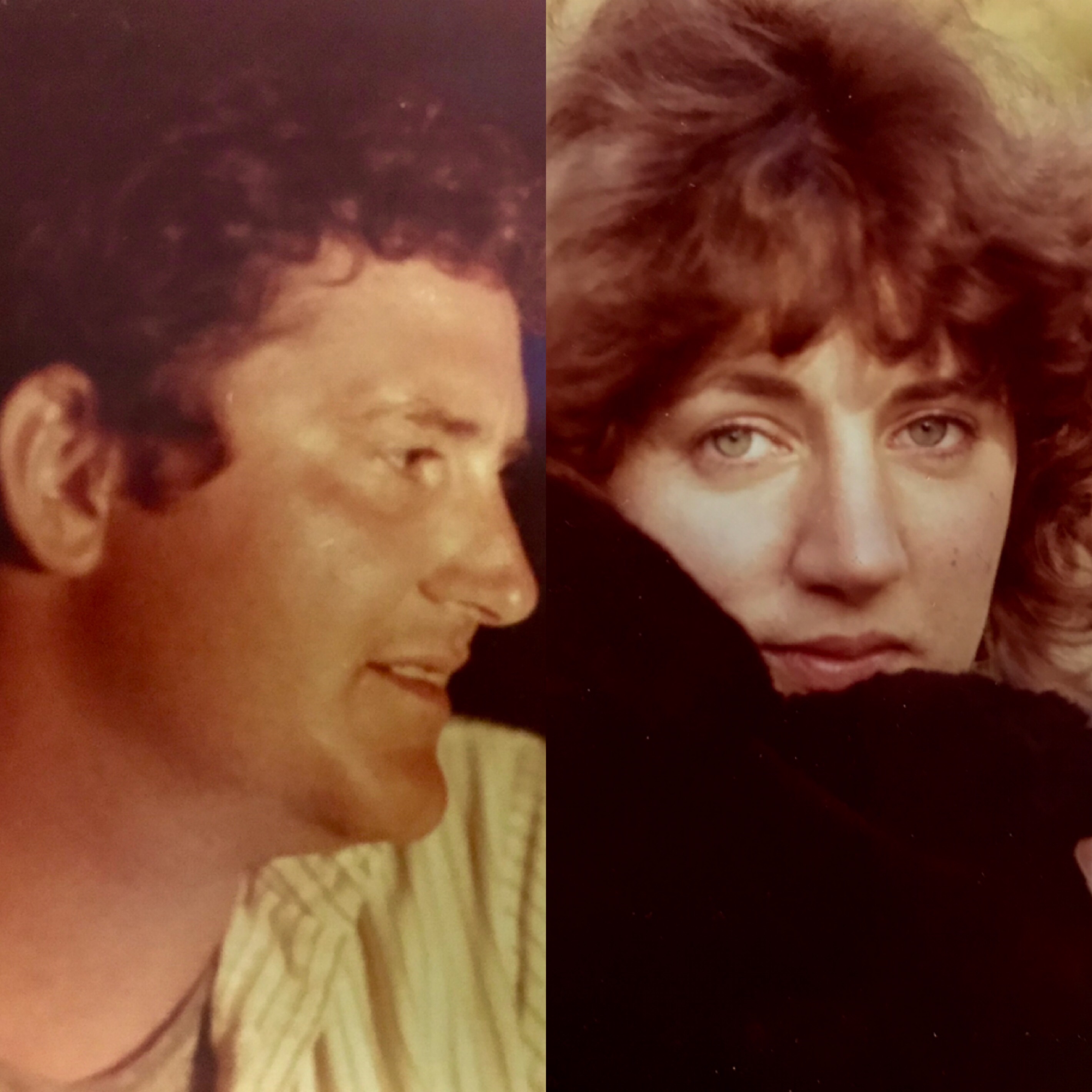 And then there is my beloved Michael, also still so alive and present in the air around me, in the viscosity of my inner being. I’m coming up on three years since his death – I take comfort in knowing that I can’t possibly live as long without him as I did with him. I was talking with a friend of mine the other day about both my grief and my steely core of strength. Some psychologists say there are 5 stages of grief, others say 7, or even 12. I don’t know how many there are but I can safely say that for me, there doesn’t seem to be any particular order to it. I’m not in denial and I’m not guilty. I’m still mad that he’s gone, which I usually am anyway about all kinds of things. I wish I could get Michael back every day. I’m more adjusted to his physical absence because time does that. I’ve made some new memories and had good experiences. But I’ll admit that every time I read anything about 3D printing, I realize I still have his dimensions and I don’t see why I can’t get a copy of him to hang out with, especially during this time of pandemic and uncertainty. Sound a little strange? I don’t care. 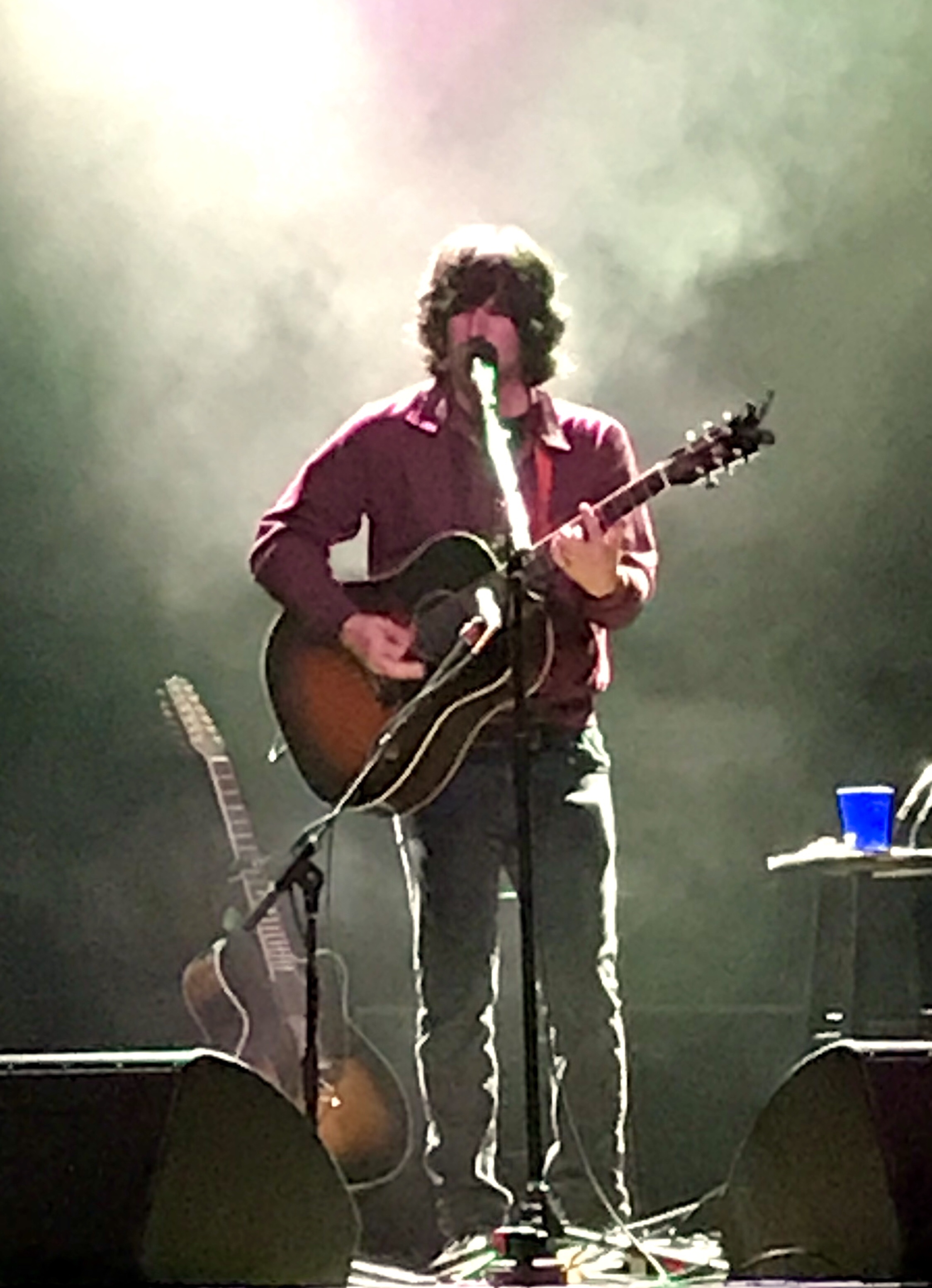 Speaking of social distancing, one of its unforeseen advantages for me has been the fact that a number of artists have taken it upon themselves to share their gifts on social media. One of them is the musician Pete Yorn, a guitarist I had the pleasure of seeing in concert last year in St. Louis. For the past three mornings, he’s given a live performance on Instagram. In addition to playing, he chats about his songs and hollers to his daughter while sipping his morning coffee. Listening to him is like a meditation, a little rowdier, maybe, but something that allows for momentary peace. 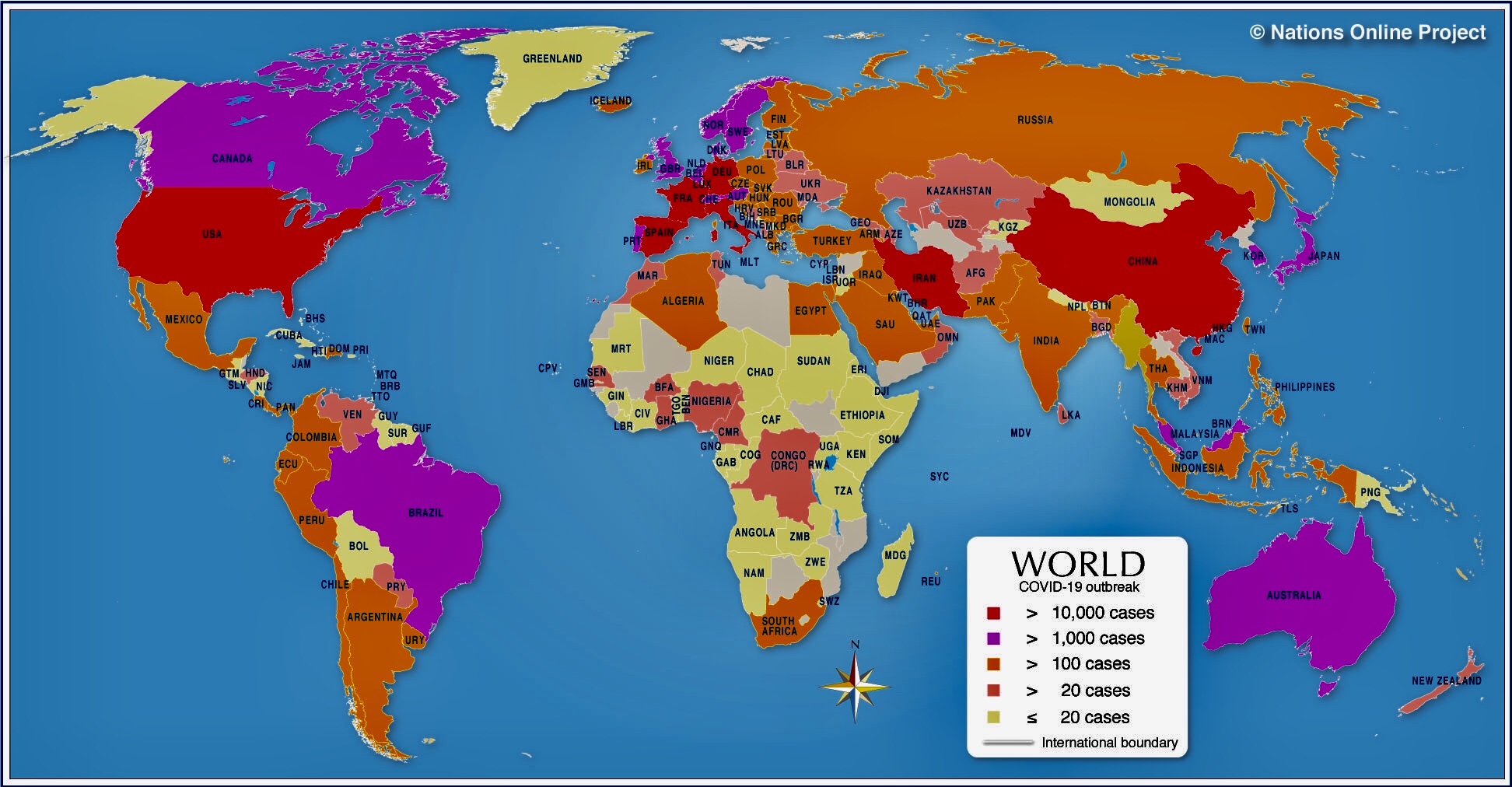 Finding a bit of peace in this uniquely scary time is a challenge. My mind ricochets from one idea to another. One minute I’m worrying about how the coronavirus will affect the continent of Africa. Then I’m thinking that the sanctions on Iran are inhumane during a worldwide pandemic. That thought gets displaced when I learn that Iran’s supreme leader rejected a US offer of aid. Next I’m worrying about the Tokyo Olympics. And I’m always wondering if there will be a real election this November that will remove Donald Trump from my sight. Life never ceases to mystify me. 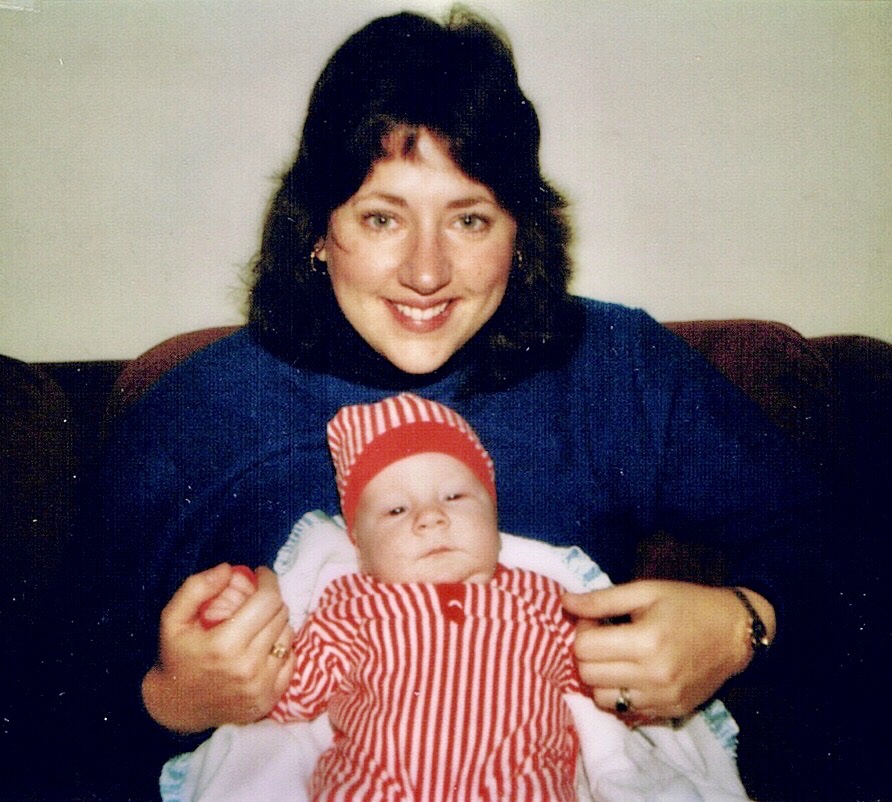 The next thing I know, I’m off on a trivial tangent. A photo sent to me by an old friend, taken about 40 years ago, has evoked a memory I hadn’t revisited in a long time. I was looking at my hairdo in the photo and I recalled its name, “the lioness shag.” This was a creation by a local hairdresser whose salon is long gone, a bank building now standing in its place. Or maybe the style wasn’t his creation. I think Rod Stewart wore his hair that way for decades. Moving ahead…on our third wedding anniversary, Michael and I had planned to go out for a fancy dinner. I left work a little early and went to get my shag haircut, to make myself look dazzling. I also decided to add a little pizazz by having highlights added to my hair color. I remember being excited and a little nervous. 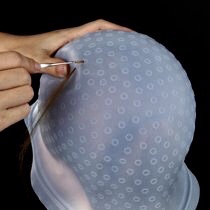 To get these highlights, a rubber cap with small holes was squeezed onto your head, and with some tool like a small crochet hook, the stylist would pull random hair strands through the holes and then lighten them. This was a lengthy process and expensive for my means. After it was finally done, my hair dried and styled, it was clear that nothing had happened. My hair had stayed the same color. I didn’t want to pay all my hard-earned cash for nothing so I got the guy to try it again. All for naught. My hair stayed the same boring brown shade. I think I was there in that salon for two and a half hours. In the days of no cell phones, I couldn’t call Michael to tell him where I was, why I was late. When I finally dashed home and went into the house, he was gone. He’d gotten insulted because he thought I’d forgotten our anniversary and left in a huff. I hadn’t thought about that in years until I saw my hair in that picture. My guy had a volcanic temper. But I could get past it most of the time. 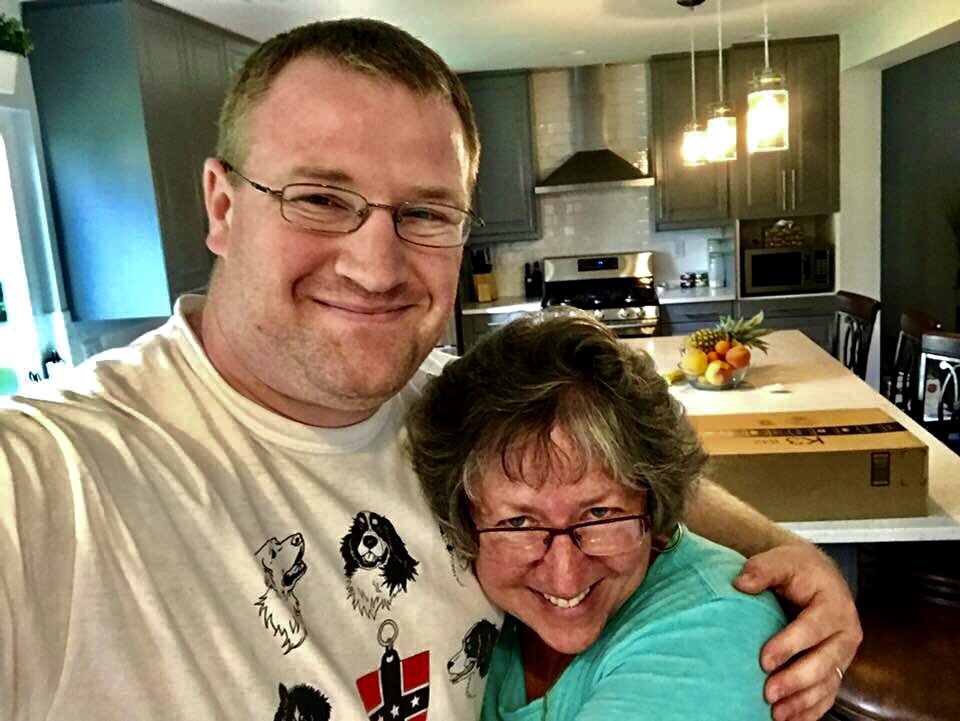 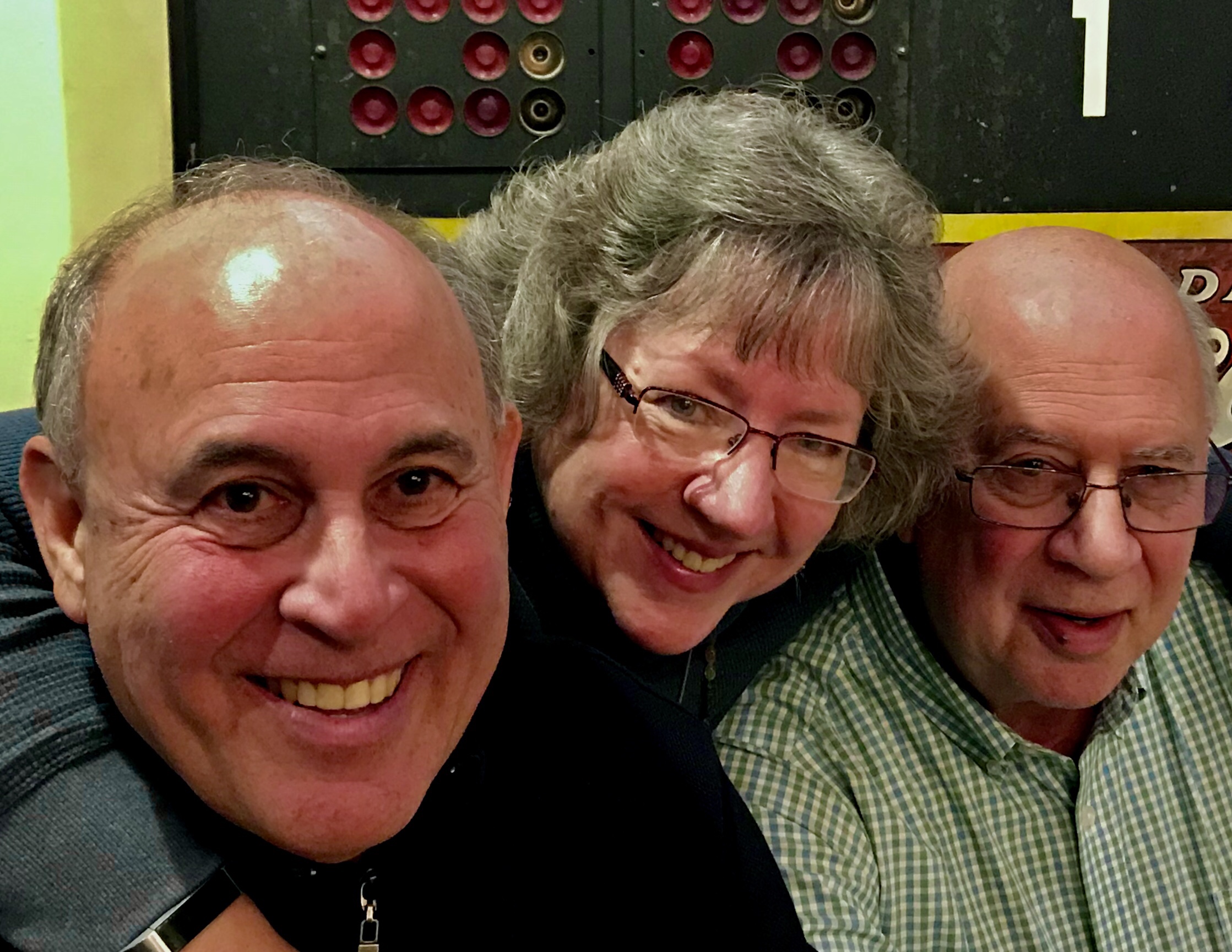 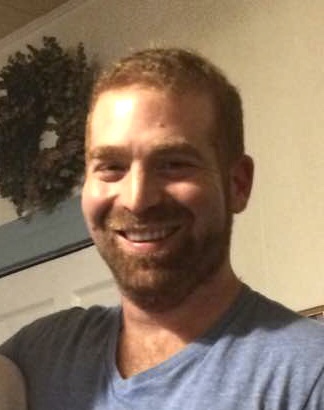 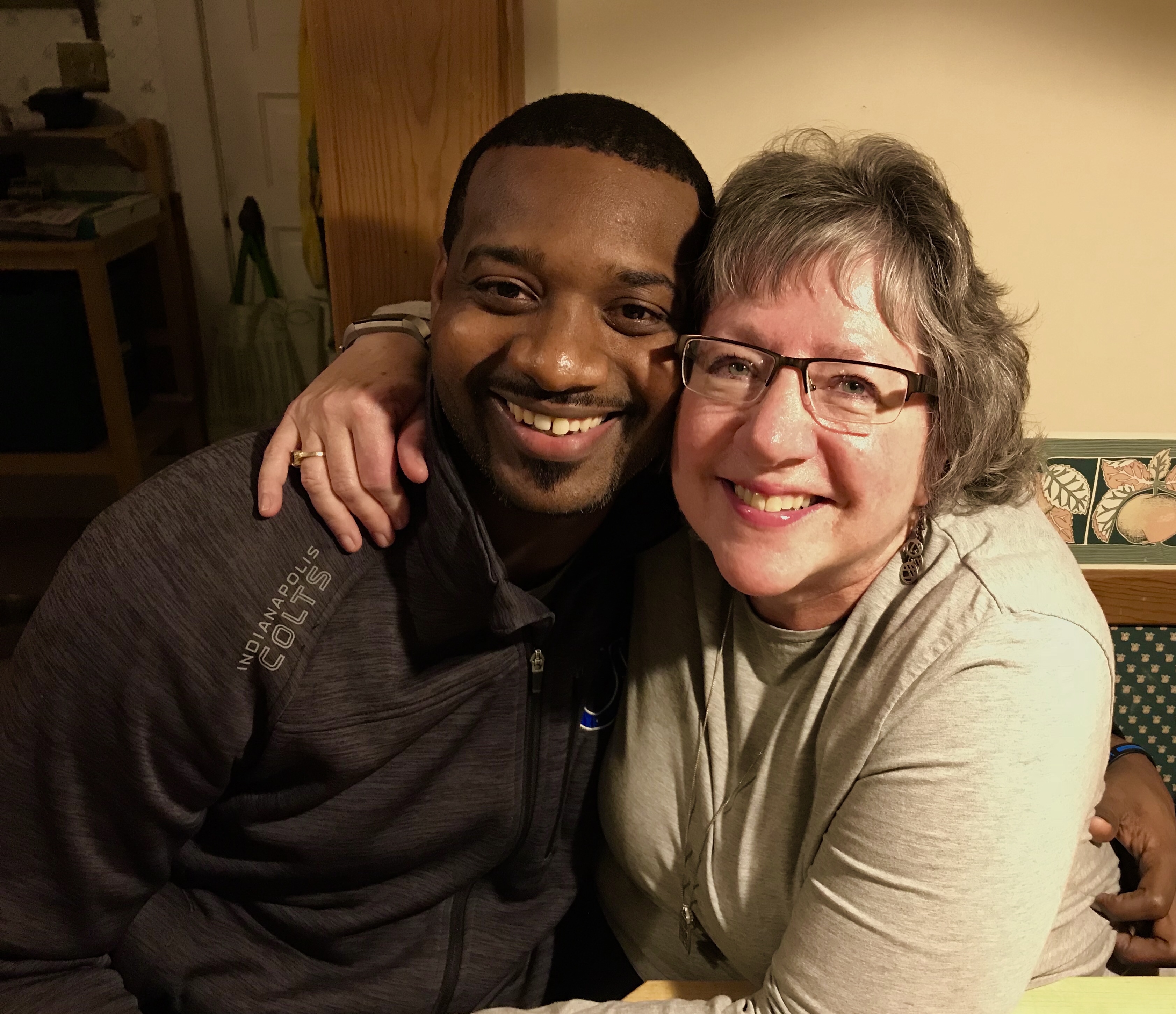 During these many days that have rolled, some already behind me and more out ahead of me, I’ve been gratified by the different people who’ve reached out to check on me. There’s something quite touching about knowing that my existence enters the consciousness of those who aren’t part of my daily life any more. They remember I’m out here, and for those who choose to pay attention to the abundance of caution and warnings for my age   group, they realize I’m living on my own, that I might be vulnerable. From my old boyfriends from my teens to the young people I’ve inherited through my kids’ lives, concern about my well-being has popped up in the sweetest ways. Even as I still tussle with the annoying concept of my having proceeded to the head of the mortality line, it’s nice to know that I still resonate with friends outside my family, friends who want me to be well, to stick around for awhile. One guy reminded me that I had to make sure I was bolstering my immune system. Check. 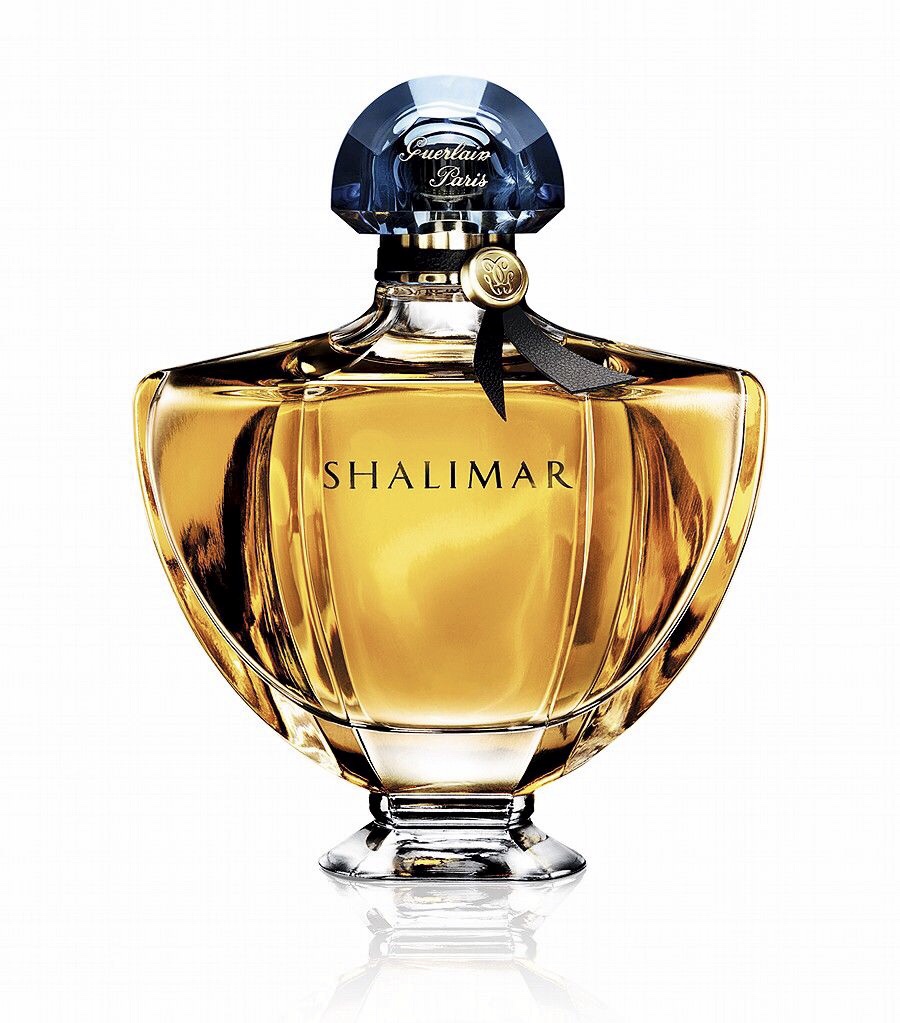 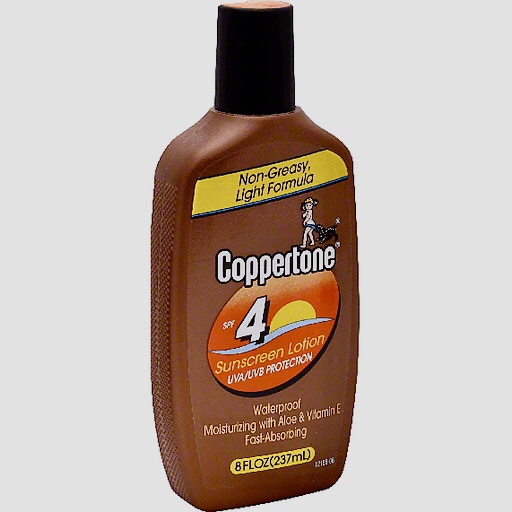 I do have some little tricks I’ve always depended on to transport me out of stressful times. Aromatherapy does wonders for me. The first perfume I ever received was Shalimar by Guerlain. My boyfriend Rich handed me a package at my locker on my fifteenth birthday. When I opened it I felt so sophisticated, so important. I used it very sparingly, hoping it would last for a long time. Once I had enough money to buy my own, I’ve always kept a bottle around. Its scent reminds me of innocence and hope and possibilities. I’m wearing it right now. And then there’s Coppertone. That smell takes me to Lake Michigan and Rainbow Beach, the place I learned to swim. A little dab of it shifts my mind to sunny days, warm skin and bracing water. Before I retired, I always kept a bottle of it on my desk in my windowless office, to help stave off the doldrums of long grey wintry days. When coworkers entered my space, a little whiff of it was evocative for them as well. I pulled out my lotion at the beginning of this isolation period and use it as hand cream. Its magic power is still working. 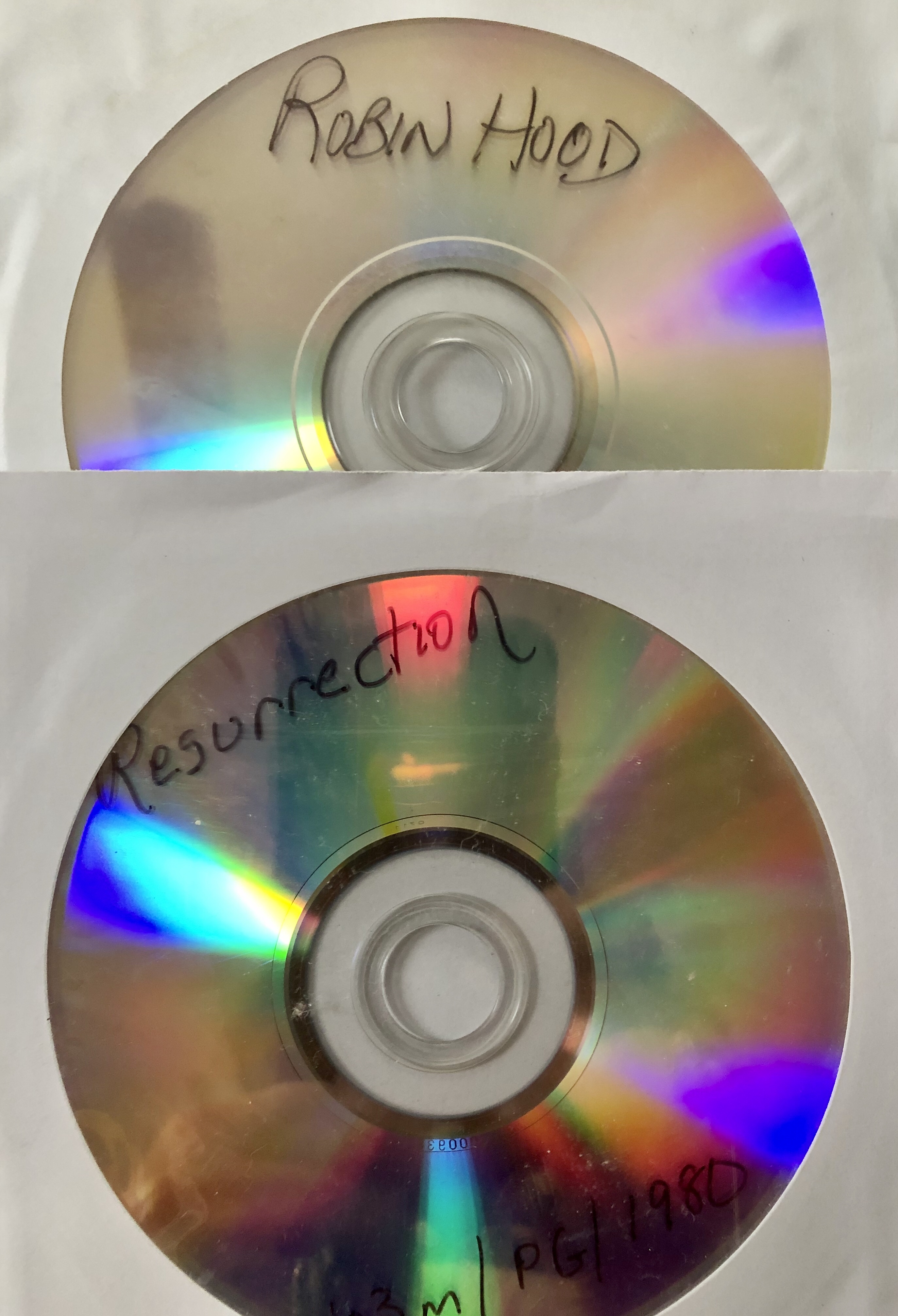 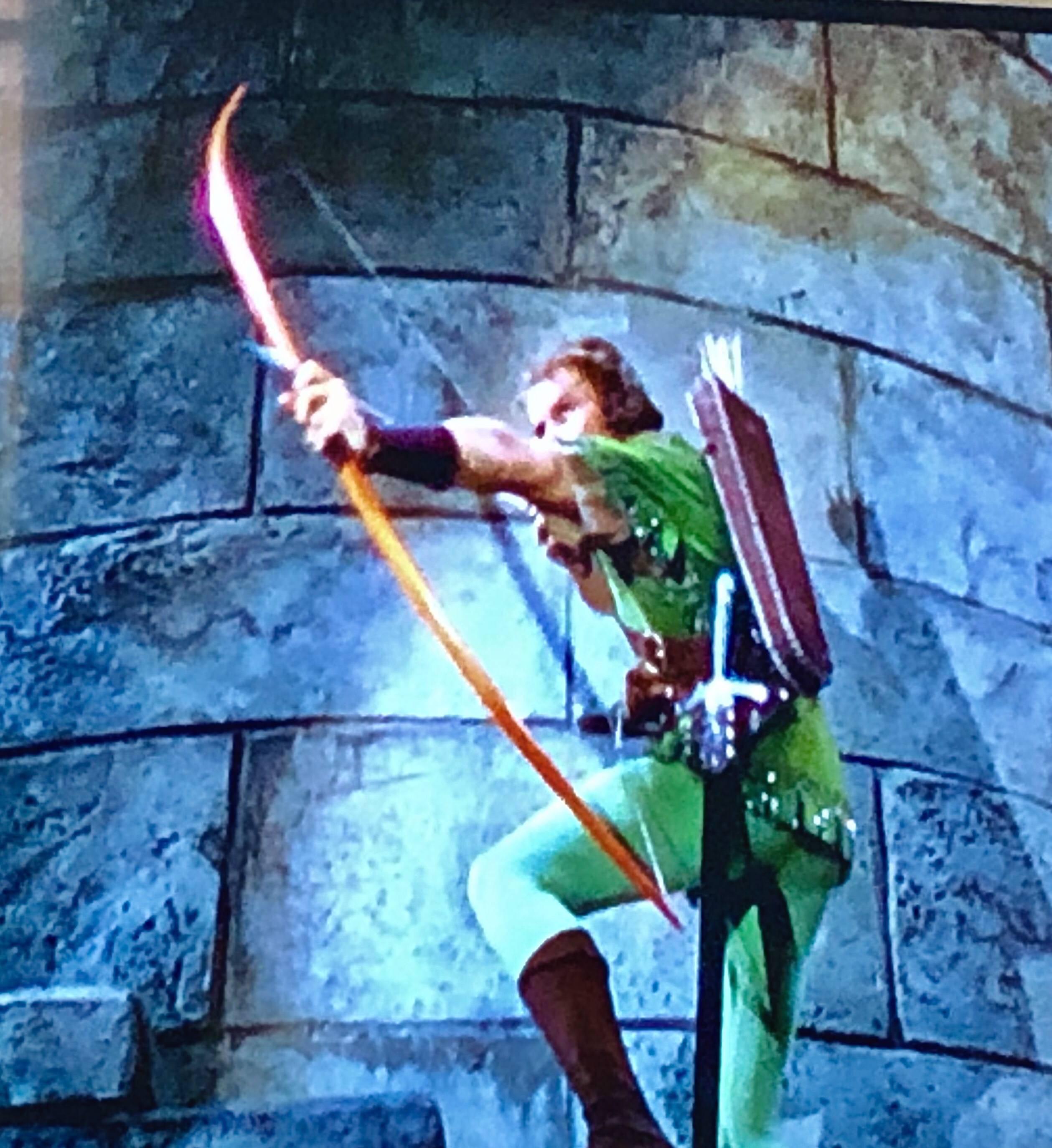 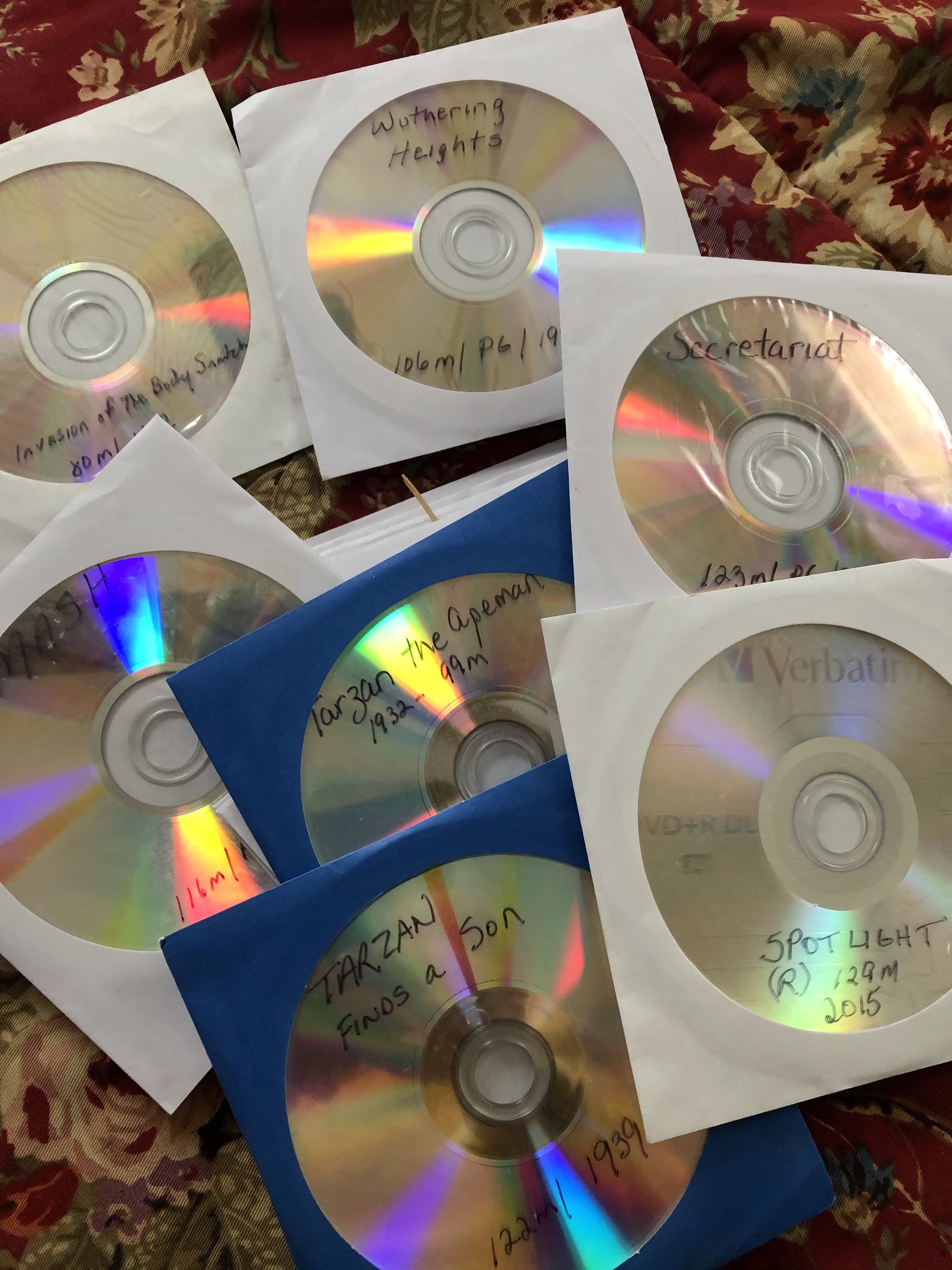 The other day, my daughter and I decided we were probably safe enough to get together for awhile as we’d all been hunkered down without any social contact for days. On our list of things to do was showing my eldest grandson the 1938 Robin Hood movie starring Errol Flynn. My mom had passed on her love of movies to me. Michael and I were both serious film junkies and in turn, exposed our kids to our favorites. I went to dig out the DVD to bring across the street for our event. I haven’t watched a DVD in a long time because DVR’s and streaming services have essentially eliminated the need for them. When I went hunting, I ran into Michael’s ridiculously huge collection of them, alphabetized, of course. He used lots of them in the class he’d developed for his high school students – Modern American History through Film and Music. I knew he had a lot of movies but there might be thousands in his storage area on a corner shelving unit. I pulled out a few, some of which like “Tarzan Finds a Son,” made me laugh out loud. I’m thinking that if the social distancing becomes a way of life for more weeks, I might trying watching them all in order. That is, if I can get the ancient DVD player to work. Somehow, writing the rest of Michael’s orphan cancer story right now just doesn’t seem to be a good option in this most strange period in time. More irrelevant ramblings to come… 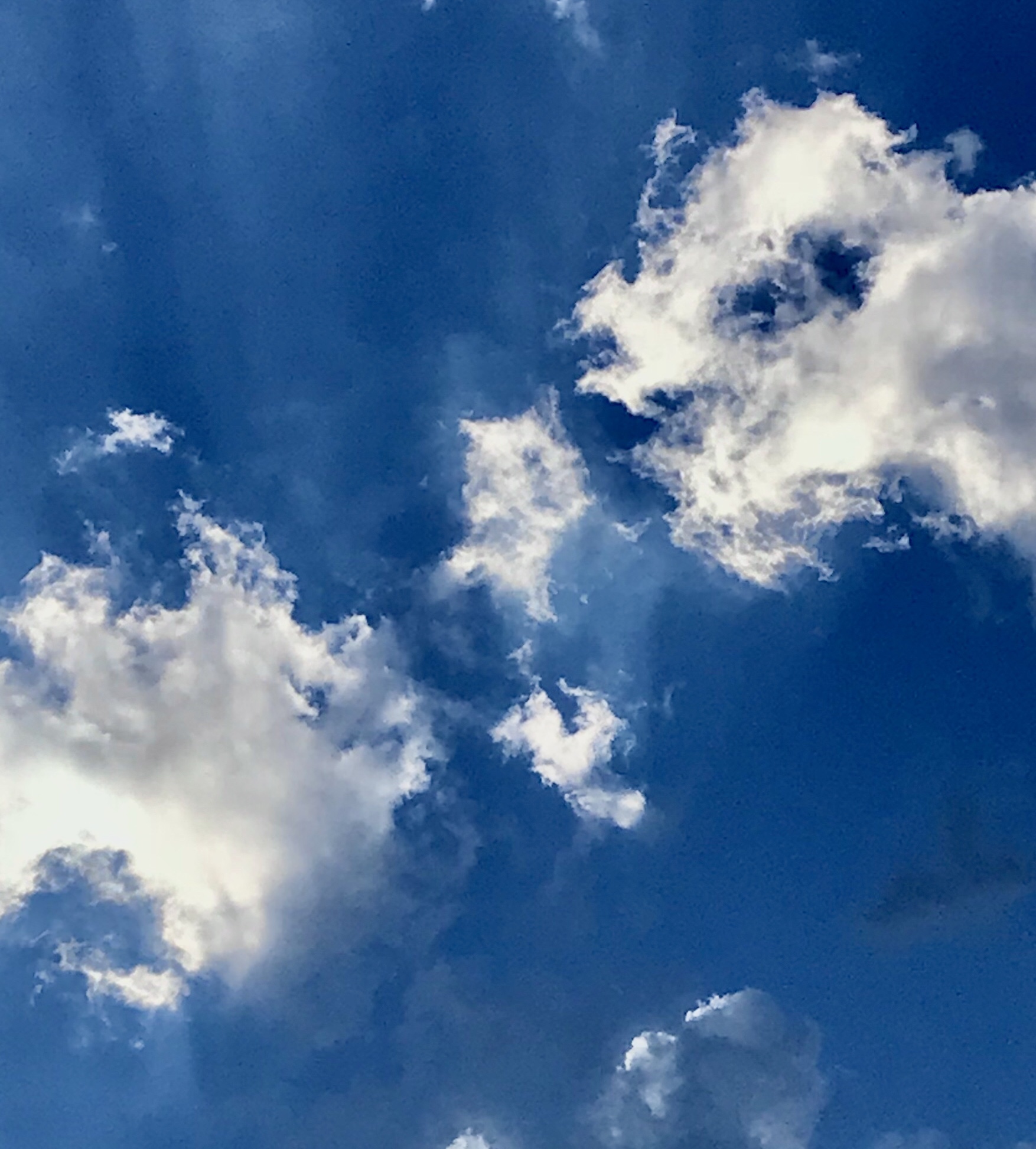 2 thoughts on “Stream of Consciousness”