I’m feeling whelmed. Not overwhelmed, certainly not underwhelmed. Just whelmed. Engulfed by thoughts and feelings. The current state of lockdown life has altered for me. My grandsons have reached a new level of discomfort in their quarantine. They miss school and their friends. The electronic life, although better than nothing, has lost its novelty. Their mom and dad, both working full-time while teaching, parenting and running a household, are very tired. And here I am, right across the street, retired and wanting to help out in some way. The boys see me as a nurturing alternative which is lovely. So coming to my house is an attractive option. My eldest one in particular, was nagging my kids about coming to see me every day. My grandsons mostly think I’m just at home, doing nothing other than being available. It’s kind of like when you were a little kid and you saw your teacher at a store or the movies and you thought, “I thought they just lived in their classroom.” Who knew they had outside lives?  Hah! So we had a family meeting. I explained that I had lots of work to do and that dropping by whenever the impulse struck wasn’t possible. I also wanted the littles to stop hassling their already busy parents. We decided to create a structured visiting schedule, a time when each kid could come over and get some special attention, not just affection, but also some different activities than their home ones – a change of pace. I’m going to see each of them for a couple of hours several times a week. I’ve done the babysitting gig before. I took care of my eldest grandson from 7 weeks old to almost 3 years of age. I’d intended to do the same for kid number 2, but Michael’s cancer interfered with that plan.

I really loved that baby part of life.The boys were portable and I was definitely directing the agenda in those days. Now I have one guy who’s entering double digits in a few months and another whose physical activity level is a challenge. My kids and I decided that their time with me would be a mix of them being garden-variety spoiled grandkids, along with doing creative projects, dictated by their interests, to supplement their online schooling. This past week was our first in the new plan.  I guess I shouldn’t have been surprised when I was confronted with lots of my own issues, which were lurking in the quarantine background. 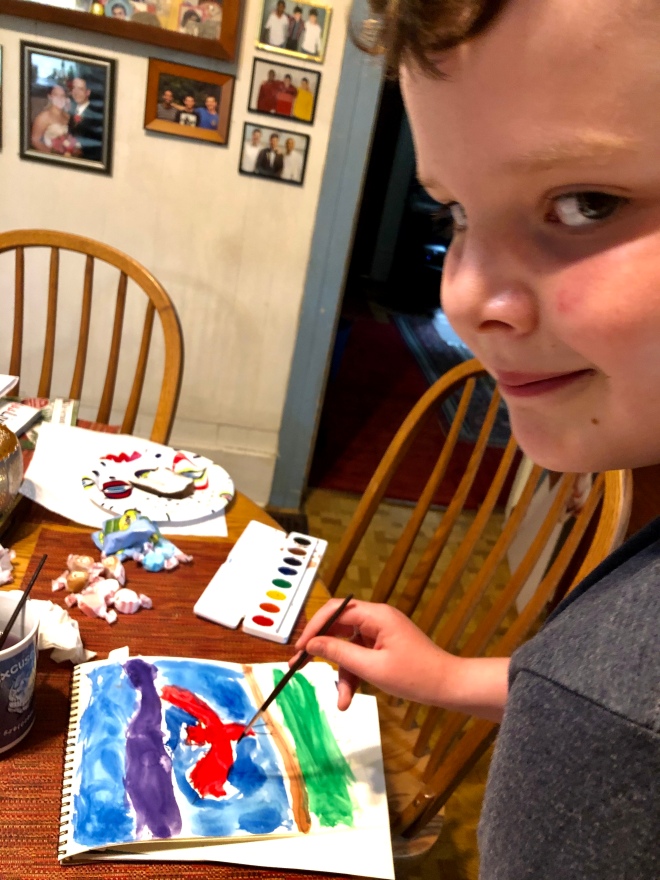 The beginning session with kid number one started out simply enough. He likes art as do I, so we sat side by side, creating. We did a little spontaneous brainstorming and came up with some ideas that he found interesting. He wanted to explore old memories and family history. We talked about making a 2020 coronavirus time capsule and a family tree. He likes the garden and willingly participates in chores outside. At least for awhile. All great ideas, right? We started with the family memories. I knew just where I’d stashed the bulk of the folders and binders in which I’ve been depositing all the information I’ve sporadically collected for years. 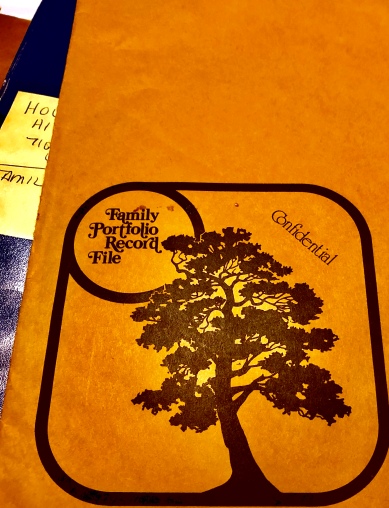 I’d forgotten how much I’d acquired. Birth certificates, census papers, gravesite locations, ship’s passenger manifests. I have my own DNA information and correspondence from a number of people who are supposed to share my DNA. G was enthralled by everything for about 15 minutes. I was anxious. But we were on his time so we moved on to the next thing, which happened to be a DVD of his parents’ wedding. 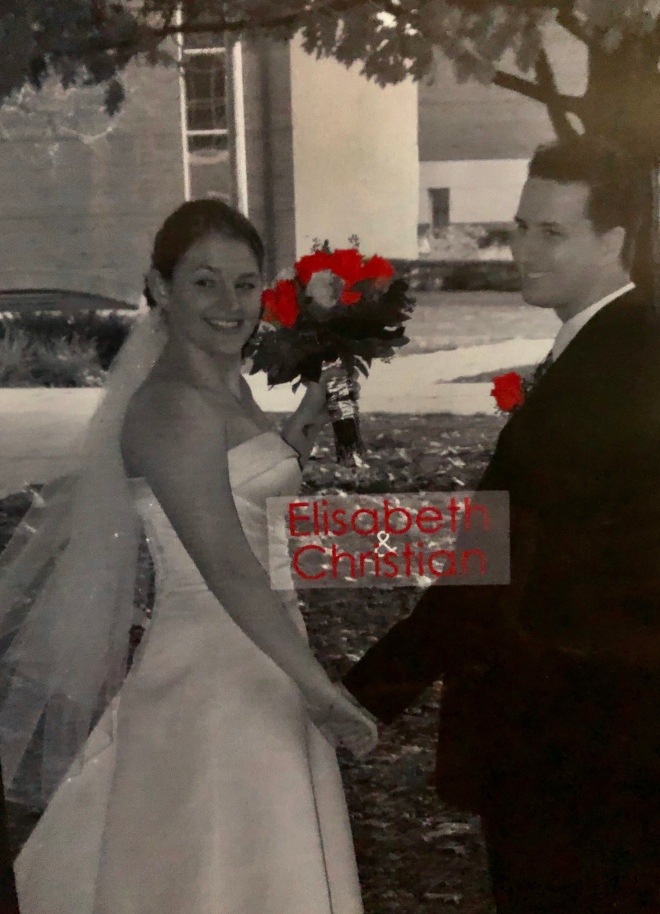 Finding that was easy too. I have a storage container with family videos and DVD’s. Some of them still need to be transferred off old VHS tapes to DVD’s. My anxiety increased. Have they eroded so much over time that they’re lost forever? I put the wedding DVD into my computer and was delighted at the clarity of the movie. That is, until it stopped abruptly about 10 minutes into the tape. Oh no! That IS on a DVD!  Was it low quality? I have a few other copies. I decided to try a few others in the player. Some were unreadable. Others started and quit. I did manage to transfer one video and 24 photos from the DVD into the cloud. I got some great shots of my son playing soccer while he was in high school and one oldie of Michael and me.

I was grateful but felt obsessed with sliding every CD or DVD into every device I have, to try figuring out if the defects are in them or my equipment. But by that time, my grandson was ready to move on to something else. The family history stuff is now piled on the dining room table and the videos are on the living room floor in front of a DVD player we stopped using after the DVR entered our lives. Groan. Whelm.

The next day was kid number 2’s turn, the very active, physical guy. I suspect he’s destined to become a speedy, natural athlete. When he wants to sit still, he’s incredibly focused but he loves to move. I decided to be strategic about our time together. I planned a breakfast picnic in the car, which is always popular. Then I thought we’d take a drive through the country. The skies were filled with puffy cumulus clouds and I know where to find the cool horses, donkeys and steers. The food worked. The drive in the country? Oh well. He found all that stuff exceptionally uninteresting. Within a few minutes he was begging to go home. I did manage to get a few photos for myself. 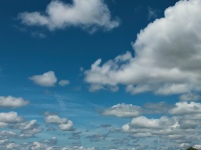 When we came home, we’d killed an hour and I decided he could watch a favorite show on Netflix. I left the living room to get him his favorite drink, “ice cold fresh water.” When I came back he’d moved a pretty heavy piece of new exercise equipment I’d purchased and had shoved under a chair. He was using it properly, explaining that when he grew up, he planned on being a “muscle guy.” So I watched while he worked out for the rest of our time together. That was much easier than having to run after him if he decided he needed to be outside.

Ordinarily none would of this would seem like a big deal. I’m happy to be with the boys, for myself, for them and their parents. I knew I had lots of projects that were hanging around, started but unfinished. I’m actually still quite interested in them. But I’ve got a lot of stuff to do. A big house and a big yard means lots of big work. I need to make time for exercise and other personal needs while trying to stay sane during this pandemic time, which, by the way,  I think is going to be a longer experience than some people might like to believe. Sometimes I feel claustrophobic and other times, nervous about all the scary possibilities. Death and disease during this time have already affected me personally. I’m still actively grieving for Michael which feels more like a permanent state at this point. Lots of people are facing tough challenges. Why should I be more whelmed now than a few days ago?

I think it’s a combination of my age and experience, in tandem with the knowledge that it’s likely I’m not going to finish as many projects as I wish I could. I no longer see a limitless vista ahead of me. Will I outlive this “new normal?” I have no clue. I got used to living in each day when Michael was sick because we had no other choice. But as determined and open about that as we were, the moments came up when we’d both acknowledge the frustration of not being “done,” “being ready to let go.” Michael never got there. To his last cognitive moment he was saying he still had so much he wanted to do. I think when I added structured time back into the amorphous life I’ve been leading since he died, I realized that I’m still so, so un-done. Will I ever finish? That’s the mental and emotional current that’s risen up to engulf me. 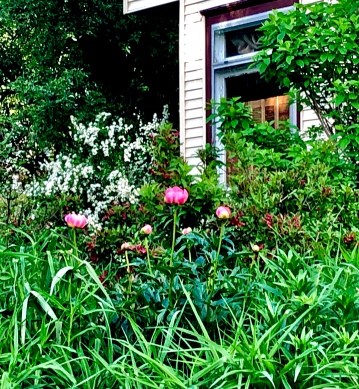 I was outside admiring both my front and back yards today, with G here for a spontaneous unscheduled visit. From a distance everything out here looks so lush and beautiful. But as I step closer, I see all the weeds that don’t belong and the hours before me, working away, just trying to feel a bit accomplished, staying ahead of the game. An apt metaphor for my whelmed state. Things seem ok, tend to be much more challenging than you thought, and are most likely, never done. I’m just going to have to keep trying to come to terms with that. Be well, universe. 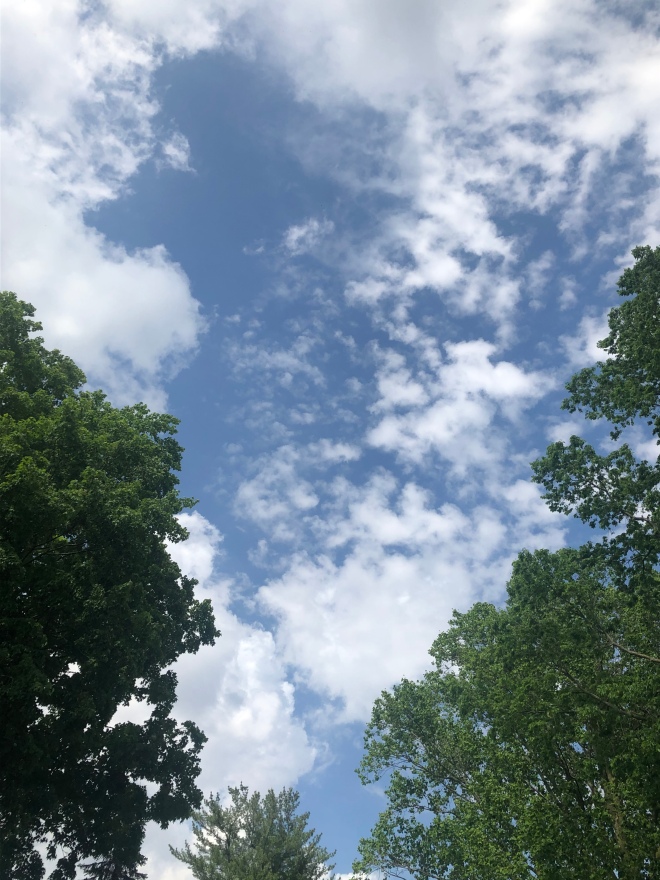