The weather where I live has been hot and very dry. I keep my birdbath full and yesterday, I turned on the sprinkler as well. Lots of thirsty birds arrived within minutes to cool off and drink. This female cardinal has a nest with her partner somewhere in the tall shrubs behind her. Her color and markings are unusual so I always recognize her. I do a better job attending to my avian friends than I do for myself. I’m always sweaty and uncomfortable in the summer. Toward the end of April in many years past, I’d start complaining about the heat and Michael would say, “so long – see you in October.” I actually wasn’t quite that bad, but I’m not enamored of this annual muggy time. These days, though, I’m sending myself different messages. Right now, I’m hyper-aware of how lucky I am to be outside during these months, sticky and disgusting though I may be. My outdoor space liberates me from the claustrophobia being experienced by people who occupy small spaces in crowded cities. Icy winter will change how I manage virus time, when I’ll be on the inside, looking out. I’m consciously working on these messages to myself.  Unconsciously, too. Some of them are clear and easily explainable. I ponder over the others. 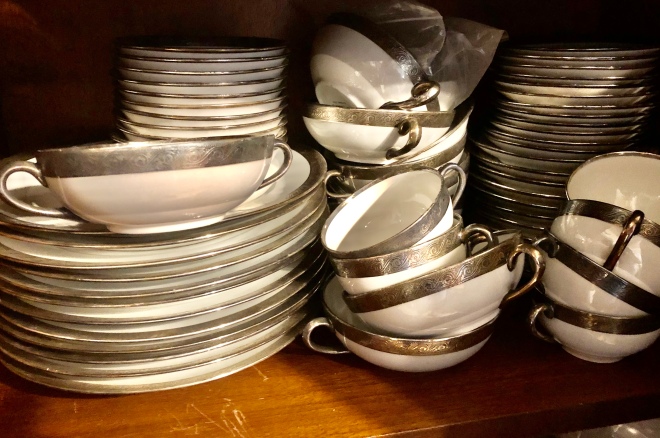 What messages are poking out of my subconscious brain? I’ve been remembering lots of my dreams. I’m recording them so I won’t forget what’s being sorted through while I sleep. The Covid19 nightscape. Last night’s internal video made some sense to me. I dreamed that Michael and I were going to renew our marriage vows. It felt more like a first wedding for awhile because I was busily registering for gifts like dishes, silverware and serving trays. I was being really extravagant, selecting items made of gold and other fancy materials. I suddenly realized that was crazy as we already had everything we needed and I confessed that to Michael, who’d been assisting me from another room. Things moved from there to a conflict with some contractors who were working in my backyard. I’d been angry with them because they’d been doing a sloppy job. They were now being almost obsequious toward me, overly apologetic and fawning to please me. I realized that was because Michael was present, which felt like an admission of their intrinsic sexism toward me. I was relieved but also angry. I think some of this is connected to the basement cleaning project I did last week. I unearthed a set of china which belonged to either Michael’s grandmother or great grandmother. I’m not sure which. That kind of delicate fancy stuff didn’t fit with who we were or how we lived. I’d wrapped each individual piece in newspaper which was now falling apart and smelling strongly from dampness and mildew. The newspaper was dated 1983. Put away down there decades ago.  I just couldn’t throw away that table service for twelve. I hauled it all upstairs and spent hours washing each piece and peeling away the debris of all those years. Now it’s in my dining room cabinet until I figure out what to do with it. Somehow those dishes translated into me wanting to restart  my marriage and into thinking how much easier it is to have a partner sometimes than it is to be alone. Makes sense. Truthfully, I’d settle for a nice old-fashioned erotic dream.

That segues into another one of my dreams. Dream two consisted of me in an effort to relieve my frequent loneliness for physical contact, I found my way to a facility that catered to the common practices offered at a “house of ill repute.” What I was seeking however, was a person whose physique resembled Michael’s, and who would allow me to rest my head on his shoulder for just a few hours. A faceless person was found for with the right body type and for several nights, I got to go and rest, releasing the burdens of my day. Innocent though it was, I did this covertly as I knew this was not a socially acceptable thing.  However, someone found out and leaked the story to the local newspaper, where it became quite the sensation as both Michael and I were public officials well-known in our community. My pathetic behavior led to a city-wide sympathetic response which wound up generating a consensus that what I really needed was a cat.

I was presented with an orange long-haired feline who looked nothing like the collie-type dogs I’ve been surrounded by my entire adult life. I got the message about being lonely but haven’t figured out the cat thing. No offense intended to those devoted to their kitties, but for me at this point in time, I mostly think of them as bird assassins.

Another dream’s message was me evidently being kind to myself. I’m still a member of a cancer support group. Over the past three years, I’ve gotten half-way through the story of what it was like to live through the stunning orphan cancer process that consumed the last five years of my life with Michael. Writing about the experience has been much harder than I anticipated as the feelings it evokes are still sharp and painful. Part of me has been afraid to lose touch with the immediacy of what that day-to-day emotional balancing act feels like. When I read what patients and their families write in this online group, I’m reminded of the fragility of life and the struggles being faced by so many people. I don’t want to become numb to that, not just because what I read informs my own story, but because I feel a solidarity with those enjoined in their often lonely struggles. I see painful statements. The other night my brain spewed out a particularly sad confession written by a desolate stranger. It appeared as if it was written on a billboard.

‘‘I’m the husband of a cervical cancer survivor. I thought I could handle all the stress and be her rock but I crumbled like aluminum foil. It ruined our relationship and we’re separated. Has anyone else’s relationship suffered from this? I was the only one who knew her survival rate and it was not good at all. That’s ultimately what made me have a nervous breakdown.“

When I saw that sign in my dream, I was empathetic to that poor man but at the same time, I was gratified to know that I’d hung in with Michael through everything and had no regrets to haunt me. An important message indeed. 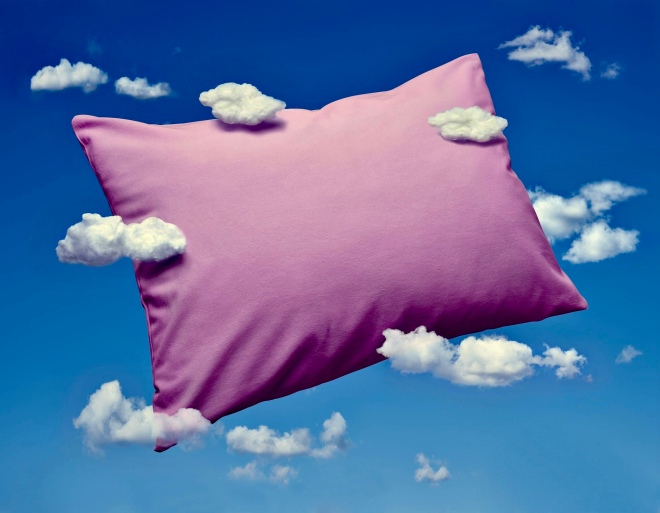 I’ve got more mysterious and obtuse dreams that I’ve recorded immediately upon waking in the morning. Enough of them for now. On the lighter side, I recently received another message from neither my conscious nor my subconscious self, but rather from Michael, the gift who keeps on giving, via one of his most loved colleagues.

Although there was a significant age gap between them, Michael and Dan were just in sync about most things, personally and professionally. When the time came for Michael to hastily leave teaching to begin systemic cancer treatment, he gave Dan his very cool red retro class stool which was shaped like the palm of a hand. The photo above looks most like it. During Michael’s years of therapy, the two of them stayed in contact, going out for beers and lunches during the good times. After Michael died, Dan had an elaborate tattoo which honored him for his personal favorites along with his mentoring talent as an educator. Dan and I have stayed in touch as he became a trusted friend.

Our local school district established a history scholarship in Michael’s name after his retirement. He was so honored and was deeply hopeful that it would be awarded long after he was gone. He lived long enough to give the first award himself. He hoped to make the initial seed money self-sustaining and I promised him I would see to his wishes. This year was the fourth time it was awarded. I knew Michael had lots of ideas about how to keep it going but so far, I’ve been able to raise enough funds for quite awhile. Last week, Dan contacted me and told me something I didn’t know. Michael had shared the idea of having an auction as a way to raise funds for the scholarship. Dan had forgotten about it until recently, when packing up to move to a new home. Then he found a box of odds and ends Michael had left with him for the sale, along with the red stool. He asked me what I wanted to do about them. I told him to keep the stool as a token of Michael’s affection. I wanted to see everything else. Oh my. What a bunch of great laughs from my ever-quirky and kitschy guy. 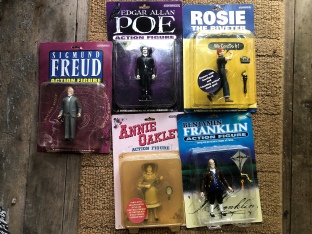 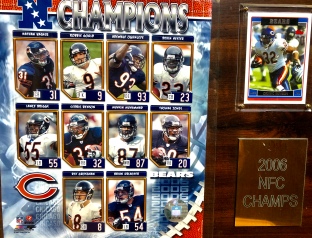 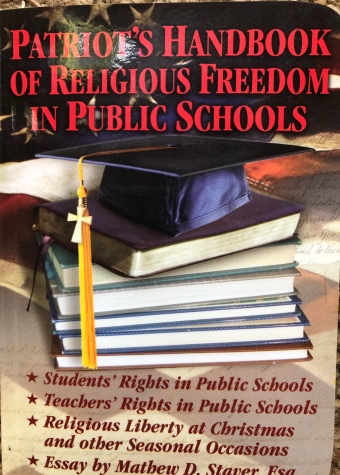 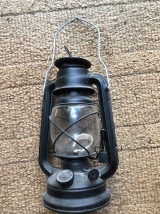 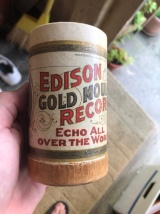 Look at this bizarre stuff. A Freud action figure. How about Annie Oakley or Edgar Allen Poe? Let’s not forget a flatulence machine, to be polite, which still works. My nine year old grandson is willing to pay almost anything for that. There’s a blanket with all the landmarks of our community and some academic treatises on the Viet Nam war. I haven’t had the time to give every item the attention it deserves, but I’ll get there. For the moment, this medium was the message. My funny inventive husband didn’t raise any money from his idiosyncratic collection but he raised my spirits. A little nudge to remind me to remember the good and to find a little humor in the midst of everything. I’m going to stay a receiver- message input from many sources is welcome here. 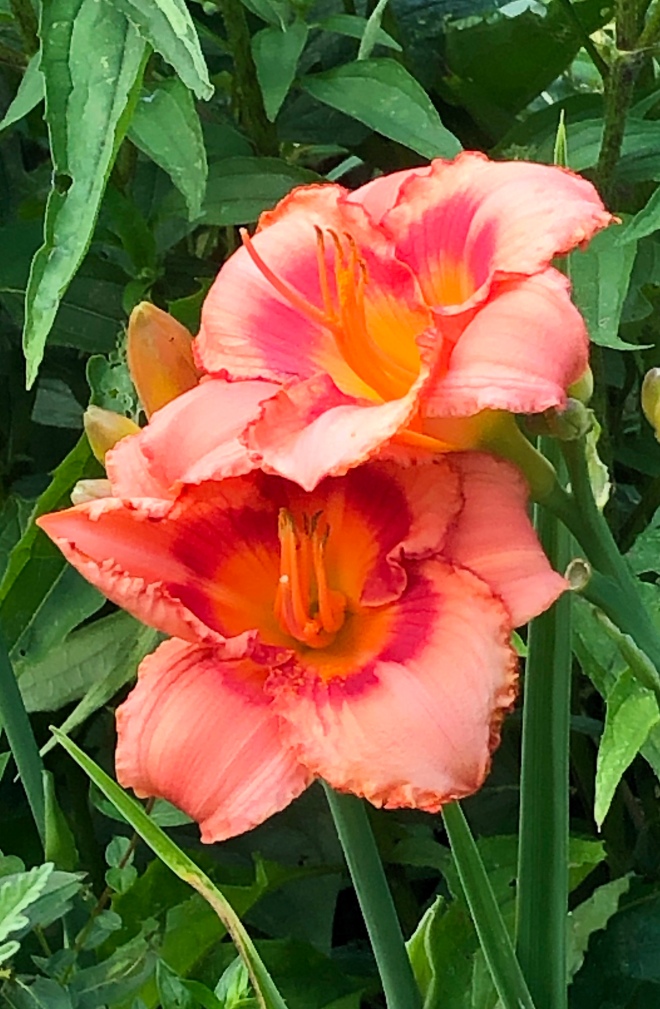