Here I am at age seven, standing in the grassy park that borders Lake Michigan at Rainbow Beach on the south side of Chicago. Except for our brief sojourn in Iowa from my infancy through 1st grade, I was born into a family of non-swimmers, who managed to stay out of the water despite being virtually  lifetime Chicagoans. I was always clearly a water person. Sometimes you wonder how you got to be the different one in the family. I remember my parents telling me they thought I was going to be an Olympic swimmer. That was naïveté talking. For them, my voluntary entry into the frigid lake was my first step toward athletic fame. I learned how to swim adequately in that cold water and then improved somewhat in high school, where we had a pool that I mostly disliked. I always preferred swimming outside. I know how to do all of the strokes but basically, I’ve got a decent, comfortable breaststroke in addition to being an excellent floater. I’d never win a race, even when I was young. But I have endurance and can last a long time in the water.

The laat time I did any real swimming was in the beginning of March when I was lucky enough to be visiting friends in Florida, whose subdivision has a pool. Lots of the residents down there like the air temperature and the pool temperature to be what feels like a bathtub to me. I was happy to have it to myself a few times on cool mornings. Covid was on my radar before I left for this trip but during my ten days away, the progression of infections was ramping up and I was terribly anxious when I returned home through two airports and as a bus passenger. I bought groceries and self-quarantined for days before having the courage to walk across the street to see my daughter and her family. Within a week, I cancelled a long-planned sisters’ trip to Alaska and hunkered down along with so many other older people who I darkly refer to as “the death group” because of our age and co-morbidities. For the first few months, the sameness of my daily life didn’t bother me much. I had my spring garden to think about and work in, I started babysitting for my grandsons and found ways to see a few people by parking next to each other and chatting through our car windows. I was really grateful I’d had both my knees replaced so I could take walks.

As the weather heated up, I started having some issues. Going for long walks and returning home drenched was not my idea of a good time. I started missing the water. Desperately. I knew the pools, both indoor and out, were closed in my area until the end of July. I set up a little kid’s splash pool and a beach umbrella in my back yard which really made a difference in how I felt for awhile. But I found myself spending lots of time on the internet, looking for bodies of water close to home, places where I could feel safe from the virus and yet at the very least, wade and feel a small sense of submersion. In addition to longing for that physical sensation, I started running low on the rocks and pebbles I’ve been using for years to decorate brick pavers which I use to surround trees and create borders for my different garden sections. I found myself going out in the yard to scrounge them out of a few containers I use as yard decorations. 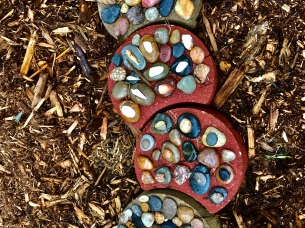 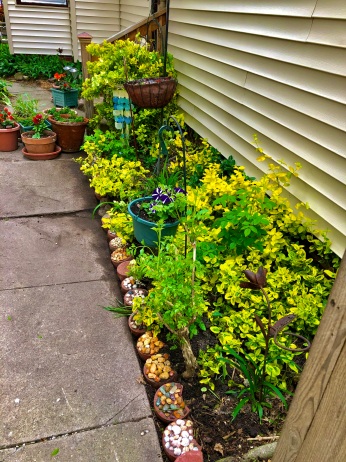 I haven’t much liked this version of myself. Lots of people are struggling with this stressful time. And certainly there are those who are facing much more challenging issues than me. I’ve not been enjoying this rather petty and selfish piece of me that’s erupted at this point. I’ve been thinking that feeling trapped without the physical release of swimming is just one piece of a bigger picture. When Michael died, I realized how hard it was going to be to not have human contact on a regular basis. I lived my whole adult life right up until his death next to a warm body. I know, lucky me. But going cold turkey has been hard for me. Being a person who plans ahead, I decided to budget a standing massage and pedicure into my calendar. Those contacts plus haircuts went a long way to not getting in the weird place I could go with no physical intimacy. Add in swimming and hugs from friends and voila – ways to stay sane. But basically, all that planning has been negated by the threat of Covid. I honestly don’t know if there will be a return to my previous existence. So now, I’ve had two significant adjustments in three years, along with the limits of travel these days. Which brings me back to the lake. While perusing social media and chatting with friends, I saw that some people, admittedly younger than me and so perhaps less vulnerable to the virus, were on the road. And what caught my attention was the photos posted of one of my favorite places on the planet, Lakeside, Michigan.

The first place we stayed at in Lakeside was a bed and breakfast place at the time, sometime in the late ‘90’s. After basically going on an extended family vacation with a close group of friends further north in Michigan, our son, our youngest child wasn’t enjoying the trips  much. When our friends decided to invest in a place as a group, we opted out to be able to address our kid’s needs. From then on, we took different trips as a family. But Michael and I always slipped away on our own for a weekend in Lakeside, right on the shore of Lake Michigan. That felt like home. The lake there has this magic illusory feeling to it. You know you’re at the shore of familiar waters but sometimes it feels like you’re on the edge of an ocean when the waves are up and the water is so, so clear. After a time, as the kids got into their teens, they wanted to join us for these few days and we needed bigger accommodations. We wound up a little way down the road at the Lakeside Inn, a rustic lodge listed on the National Register. No televisions, primitive decor and furniture, it’s a little island of detachment from the rapid pace of daily life. As Starved Rock became our winter destination, Lakeside was our summer one, with an occasional fall or spring getaway on the side. 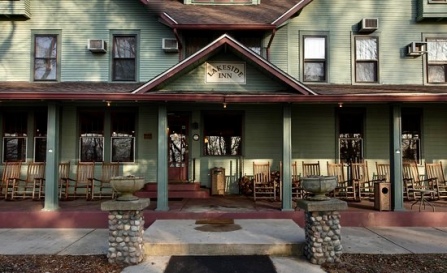 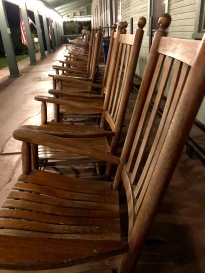 I waffled up and back about going. Was it selfish and stupid to go in this uncertain time? Was I just acting like the type of spoiled person I find so irritating? And even more than that, was I ready to go back to a place that holds so many beautiful memories of my life with Michael? I haven’t been back there in four years, since the summer before he died. We just had a scant day and a half back then because we were taking what would be the last big trip of our lives, our Utah National Parks adventure shortly thereafter. The only photos I have from that time are of Michael standing in front of our two favorite restaurants in the next town east of Lakeside, him at the beach and one of our feet in the water. 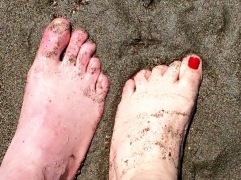 But I have photos of our family enjoying Lakeside going all the way back to 2003. There were times when it was just the four of us. We lay on the beach, swam, collected rocks and read books. Over the years we tried lots of different restaurants in the small towns that line the Red Arrow Highway, some wonderful and others awful. I remember spasms of convulsive laughter, mostly in the expensive places, when we were sharing the most entertaining words from the book Depraved and Insulting English. We played Spades and Hearts at night or Scrabble and Monopoly. Some of us were more competitive than others. I took my son’s high school graduation picture there.

He convinced me that we should go back to Lakeside as he’s heading out west soon, and we’d have a chance for one more special time together. I made the reservations, worried that I’d get up there and cry the whole time.  I wound up doing my crying in advance. I looked through all the old photos with a combination of joy and love, nostalgia and pain. I got worn out but in a good way. 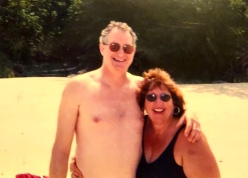 As the years passed, our family group went from four to five and eventually six. Three generations on the beach along with a couple of dogs on occasion. What I know is we had so much privilege and fun that eludes so many people. I remind myself of that all the time. 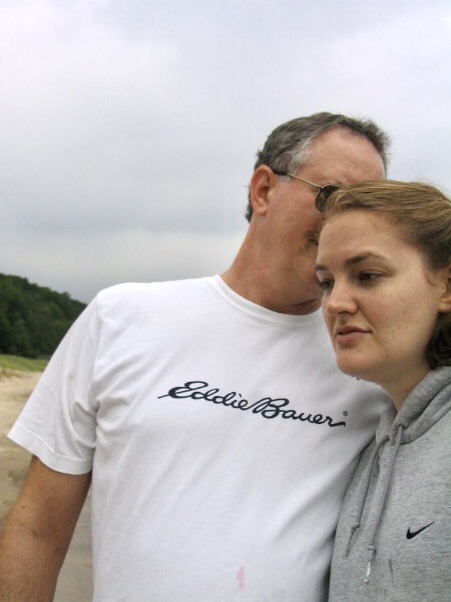 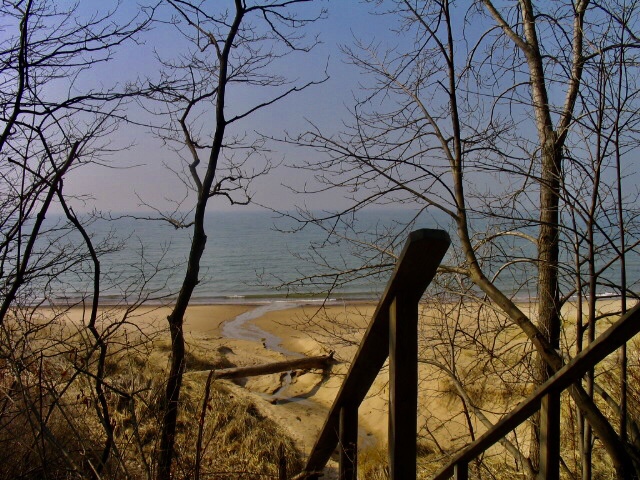 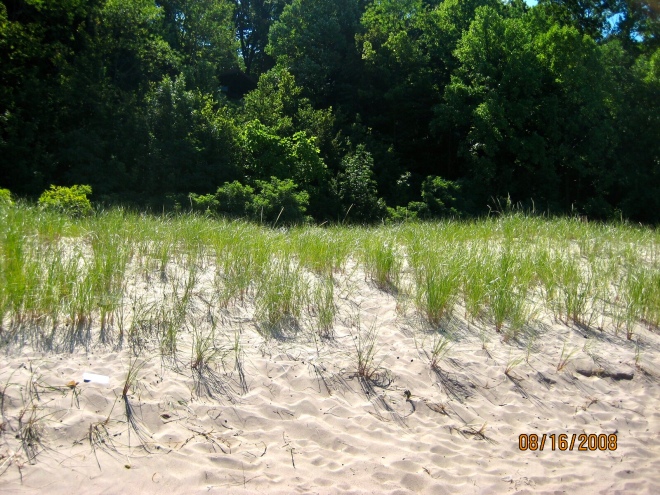 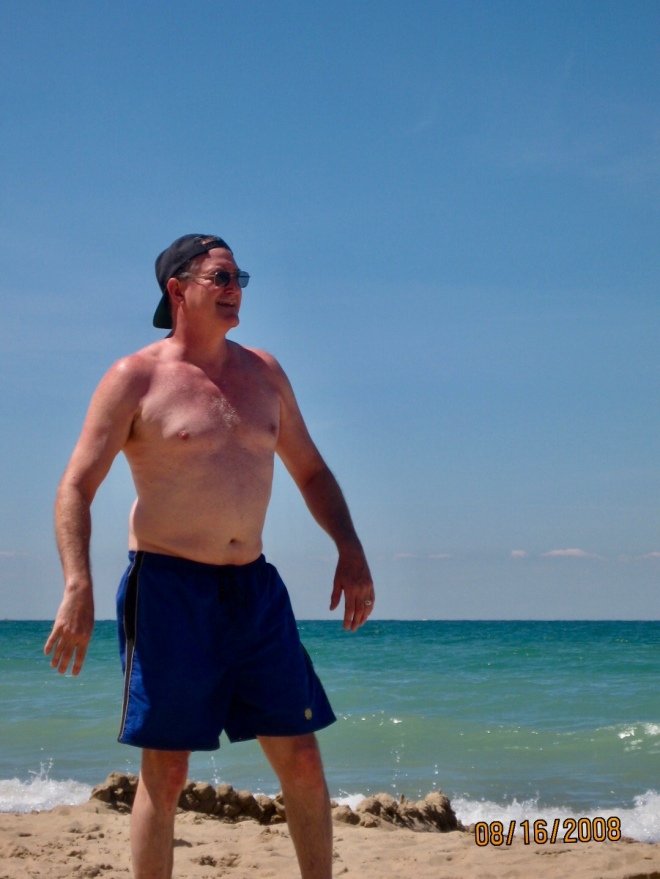 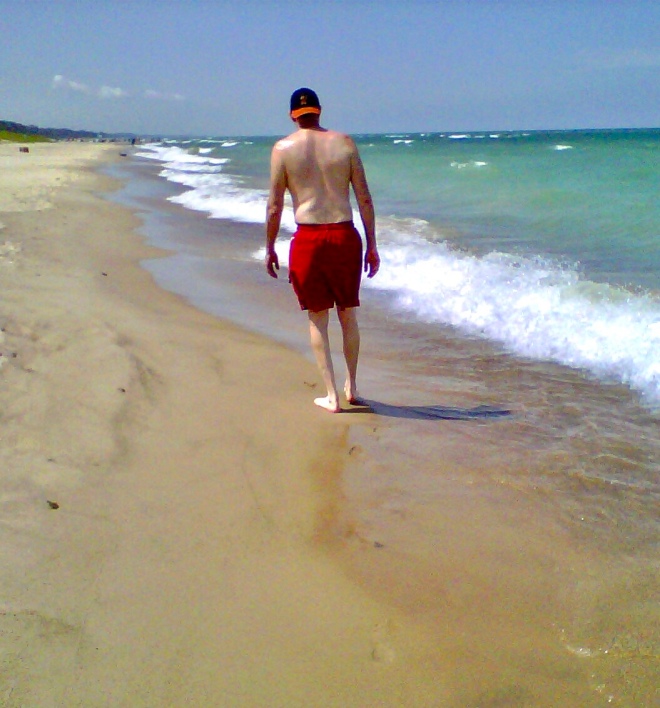 So off we went on our brief excursion. By doing the emotional work in advance, I was pretty relaxed. My son and I travel well together and we enjoyed our couple of hours drive, listening to music and chatting. We stopped at a cafe which made good sandwiches and then headed to the Inn. I was relieved to see that good Covid practices were being observed which also took away stress. After quickly checking in, we headed to the private beach, a bonus when trying to avoid crowds. The weather was perfect as was the water. I scavenged for rocks for a long time and finally got my body into the lake. We stayed all afternoon and into early evening. 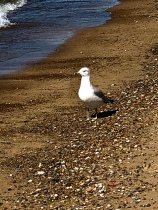 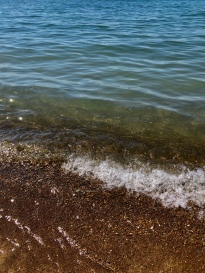 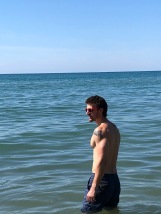 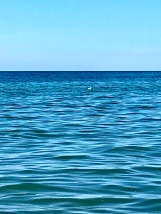 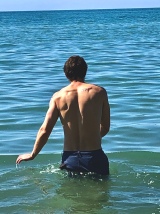 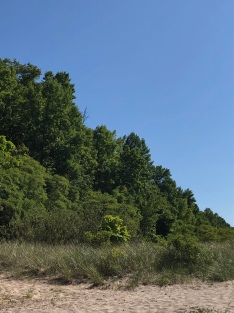 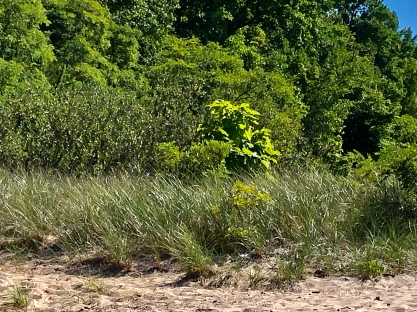 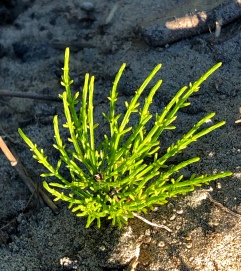 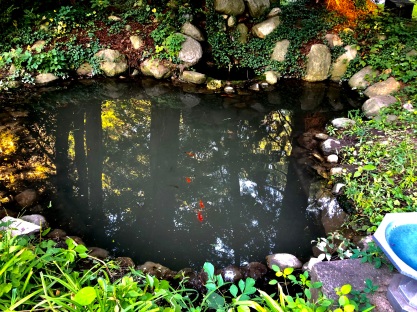 We headed upstairs and drove over to a favorite burger joint for a takeout dinner. After a day of beach and driving we were tired and decided to call it a night. We headed back to our rooms at the inn. When I looked out my window I realized a glorious sunset was taking place. We dashed back down the 115 steps to get back on the beach in time to see the flaming colors shimmering on the lake. I was so glad. Who knows when I’ll be there again, if ever? We went back upstairs and watched an episode of a series we’d been sharing on Netflix. Then my son turned in for the night. I wrote for awhile and pondered how just a few hours away from this 5 month slog soothed my tired brain. 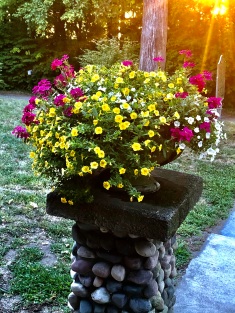 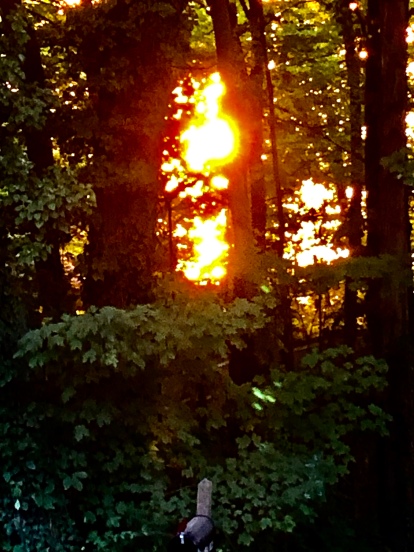 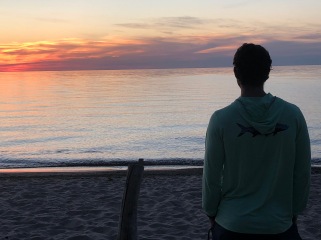 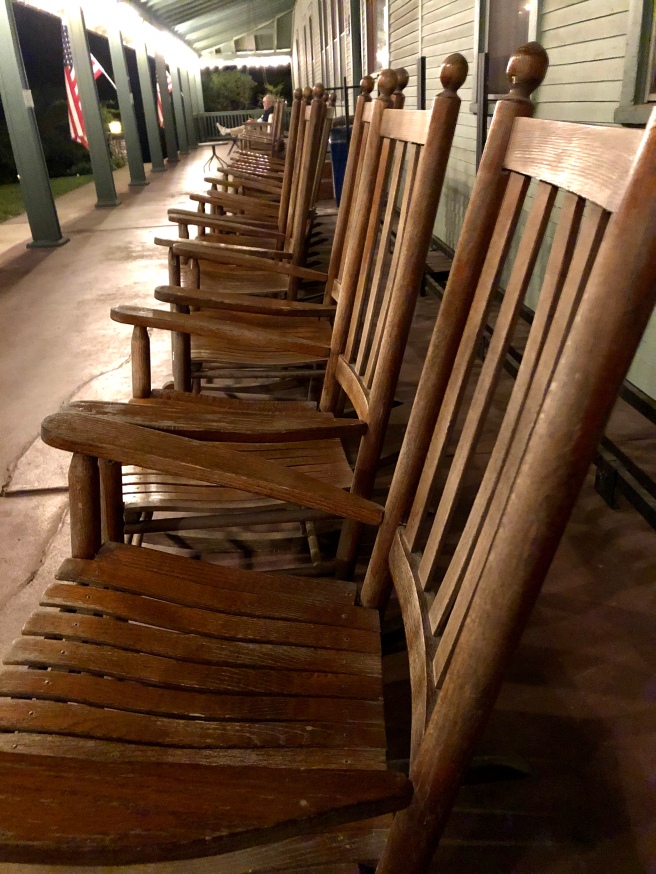 The next morning we ate our boxed breakfasts on the long porch that spans the front of the Inn. We decided to go back down to the beach for a few hours to soak in the last moments of our perfect excursion. No one was there but us. I think many people think mornings are too cold to take the waters. They don’t know what they’re missing. 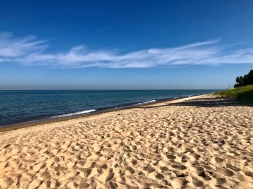 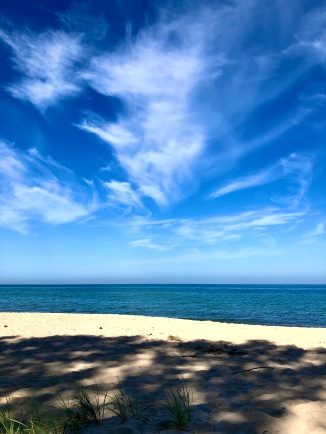 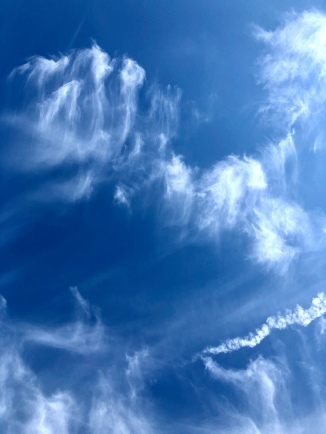 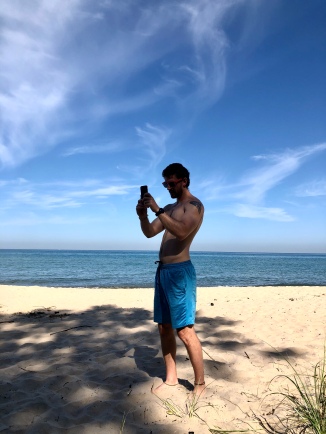 We reluctantly tore ourselves away for the ride home. I felt tired but restored. My body was so refreshed by the water and the vista from the shore. The same magic I always felt and had missed so badly. Although the time was brief, it’ll hold me for awhile. As we drove along, I was thinking of the face of a young native girl whose photo hung in my room at the Inn. I was haunted by the  layered look in her eyes, which were complex, sad and moving. Life has always been challenging for everyone, long ago, currently and certainly, will be in the future. Perspective is everything.

Meanwhile, I’m back in the routine of these past five plus months. But I’ve replenished my soul a bit and additionally, my supply of rocks for the garden project of the winter months. 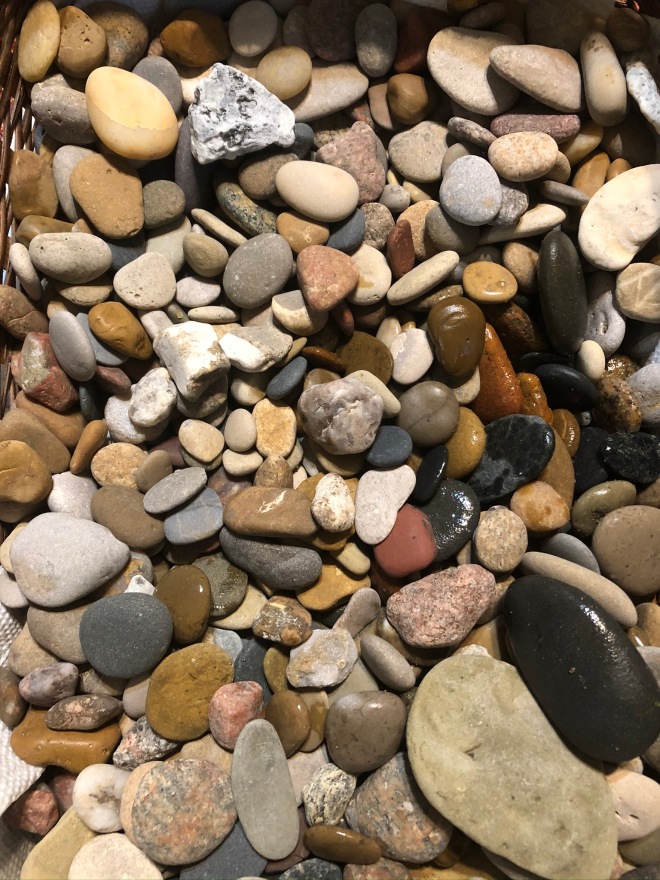 2 thoughts on “Back to the Lake”