I was reading about Stephen Hawking in the aftermath of his death. By all accounts, the genius of our time. And he said some pretty interesting things. He was an atheist. He believed in multiple parallel universes. He said that the greatest enemy of knowledge is not ignorance, it is the illusion of knowledge. After thinking about all of his theories which are so outside the box and  the definitions of “normal,” I realize more and more that I don’t understand anything. 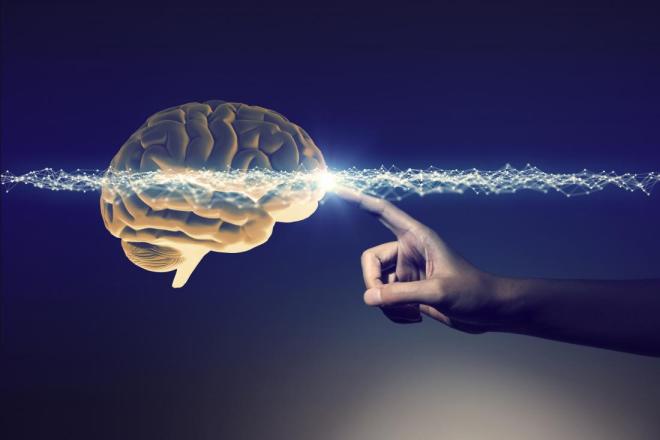 As I moved away from Hawking, I stumbled across an article about some studies being done by a British psychiatrist, psychotherapist and research fellow which posits that human brains are connected by an “interbrain” which is quietly collecting information that ultimately accounts for “sixth sense,” deja vu feelings and those “I was just thinking about you” moments that we all have at one time or another. Maybe that accounts for some of the constant traffic I feel in my mind.

Then I read about spiritual vortexes which are part of New Age concepts. They liken certain geographical locations with high energy centers comparable to a vortex like a physical whirlpool. Except that when people are in those places, the energy from them has a powerful effect on creating internal peace and harmony while realigning spiritual forces that feel chaotic and disintegrated. I went to Sedona last year, the embodiment of that type of place, and though I can’t speak to the efficacy of these forces, I can say that the majesty and beauty there do impart perspective and deep thought when trying to figure out your place in the world.

There are lots of thinkers and dreamers trying to make sense of our complicated universe. Maybe one day the technology will exist that can explain or measure what is now inexplicable. The stuff that confuses us about what’s real or imagined. What are dreams and what are not? What feels unsettling and yet somehow comforting? What is possible and what is fantasy?

So what does any of this have to do with me? 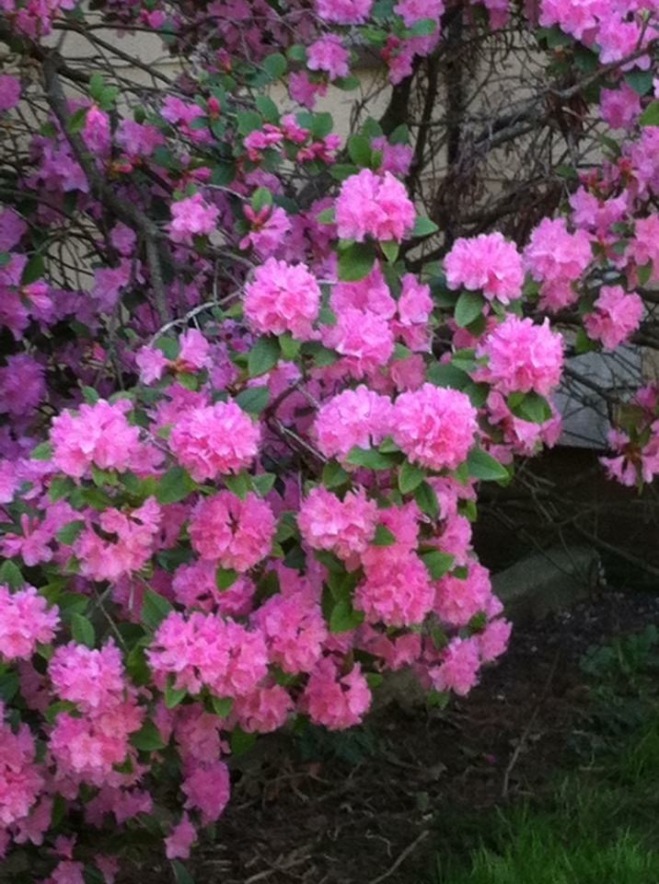 My beautiful azalea hasn’t bloomed yet this spring. The weather has been spectacularly unpredictable. Two days ago, five inches of snow fell, covering all my emerging flowers. I have lots of greenery but no blooms. A series of unexpected family events caused me to cancel a trip to Florida twice. Apparently toes in the ocean are not my destiny at this time. My forward trajectory to the one year anniversary of Michael’s death took a few side trips. But now I find myself staring down at the month of May which is heavily loaded with my “firsts,” those days which will be the ones without my partner of 45 years. Plus other May days which are emotionally loaded. 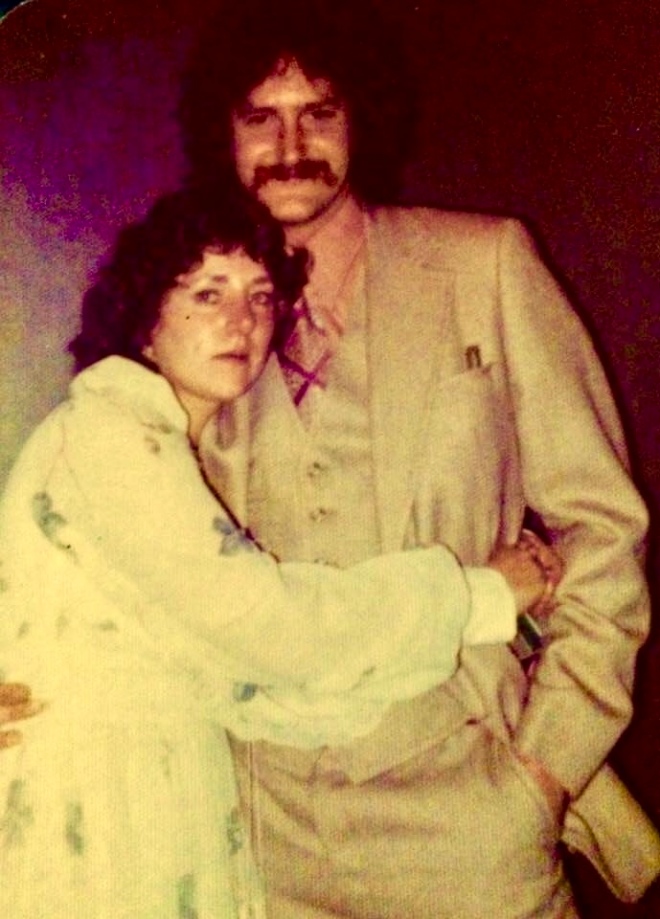 May 1st is my wedding anniversary. Last year was our 6th last anniversary. Since 2012, we’d approached each one as if it was the last. And finally the last one came. A more difficult day than I could have imagined because Michael had a mini-stroke that day and for a brief time didn’t know my name. That was hard to manage. Then mother’s day arrives, followed quickly by Fern’s birthday which always leaves me feeling bereft, even after almost 30 years since her death. We were supposed to be old ladies together, rocking on a porch somewhere, singing Beatles songs and reminiscing about seeing them live when we were thirteen. But alas.

My birthday comes ten days after Fern’s and then in four more days, the first anniversary of Michael’s death. His early June birthday and father’s day top off the emotional minefield of my upcoming calendar.

I’ve been working really hard on myself this past year. I’ve read many books about cancer, grief and recovery. I’ve been to therapy and support groups. I had what was seemingly a big closure event celebrating Michael’s life. 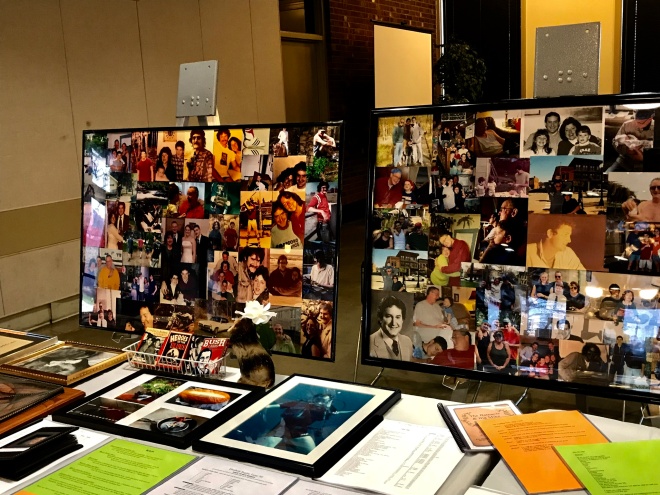 That magic one year anniversary that is talked about in death and grief literature is almost upon me. And the thing is, I don’t feel much different than I did right after Michael died. I still feel married. I feel his presence around me every day.

I’m very busy. I’ve taken classes, gone on trips, made new friends and kept old ones. I swim frequently every week. I’m planning my 50th high school reunion with former classmates. I’m writing every day, either in a journal, in transcribing Michael’s many notes and most importantly, working on the book which I hope will benefit others who wind up having to navigate cancer and our impossible health care system. And to top it off,  I’m still writing letters to Michael which are like the running conversations we had about life, family, politics. He doesn’t respond but I feel better after unloading all my thoughts. 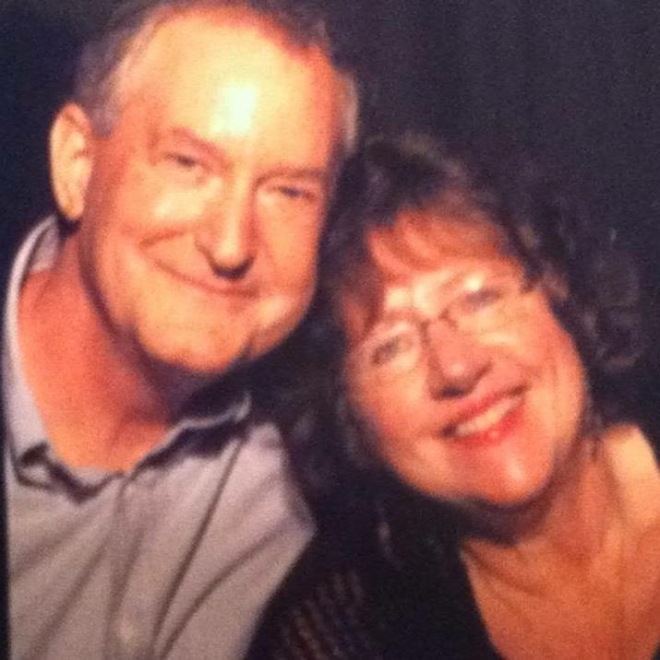 He is still with me. Sometimes, on a difficult day when I feel like I’m sinking, I get this astonishing sense of inhaling his presence and being lifted from a downward spiral. I feel buoyed and my confidence reasserts itself. The feeling is overwhelming and reminds me of the relief I’d feel after a bad day when I’d come home and be with him and share my experiences in safety and comfort. I have transformative dreams where his touch or his words waken me and I am thrilled with what’s happened and feel better for days. I love being in our home and especially in my bedroom at night. I’ve never experienced the urge to leave this place and be somewhere which isn’t loaded with memories. I’m not lonely for anyone but Michael. I’m not seeking a companion to fill his space. But for his absence, my life feels as rich and full as it always did. And with these mysterious and powerful connections to him, I am left wondering. How much microbial and genetic information did we exchange through our 45 years together? What parts of me became so physically altered that he is still truly part of me? What do I conjure subconsciously and what is left of his energy that stays in my space? Is he in a parallel universe that brushes up against mine intermittently? Are the wavelengths of what we shared still reverberating all around me? Am I a spiritual vortex that exerts energy which draws people or their vestiges into my swirling center? Question after question after question. 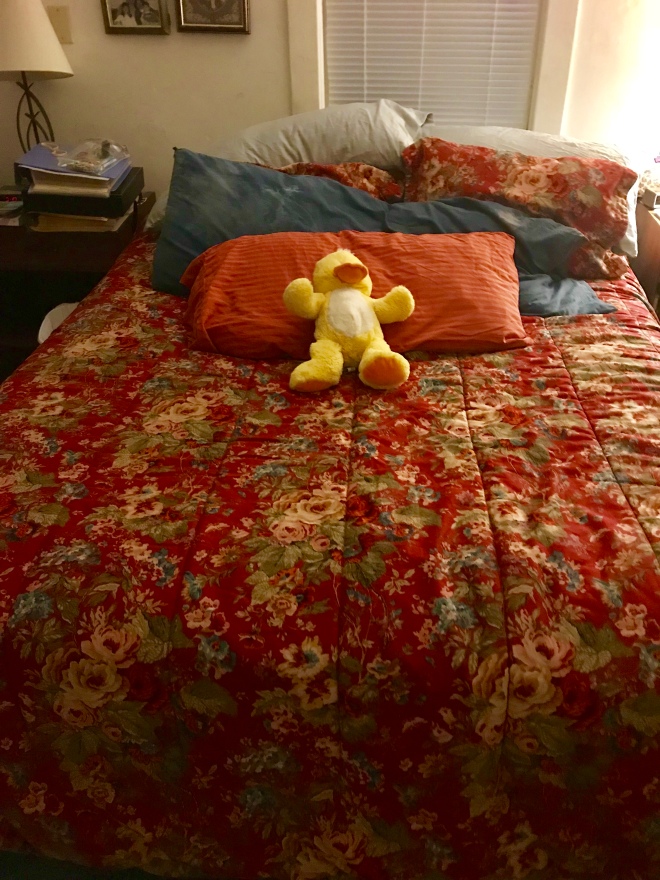 I still sleep on my side of the bed. The soft duck that Michael shared with my grandson is  ensconced there. When Michael got his dreadful prognosis of 2-3 months to live in November of 2013, I bought two big body pillows to stuff into what would be his empty spot. I use them but not as much as I thought I would. I read at night and listen to music before I sleep. Sometimes I meditate. I love to look at the photos of Michael which smile at me near my bed. Right before I go to sleep I send him a mental message asking him to drop by for a short visit. Sometimes it happens and mostly it doesn’t. 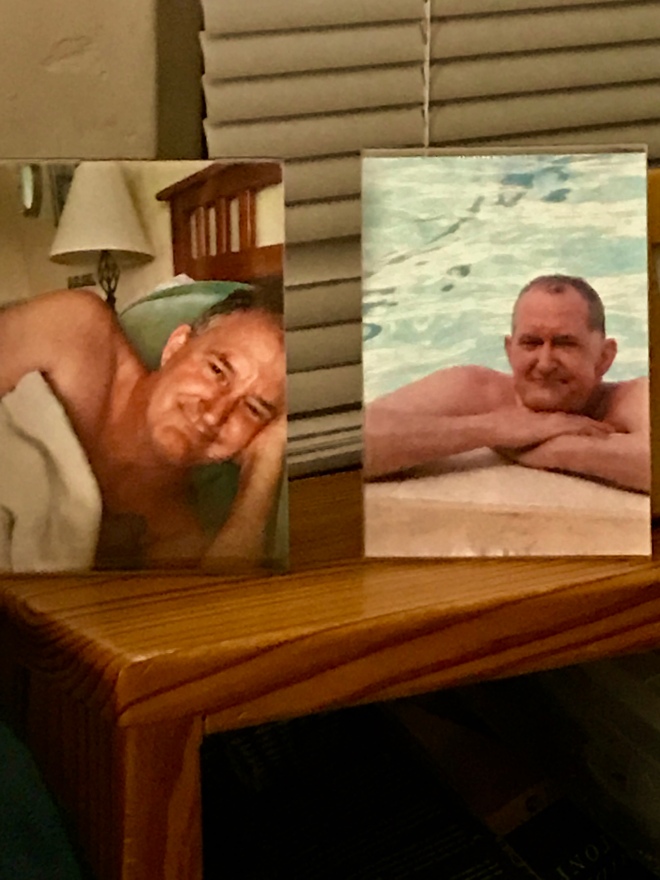 I feel comfortable in this process I’m following. I feel real to myself. I know I’m still directed to the world I inhabit and am engaged in life like I’ve always been. But exploring these new interior places in my own way and trying to figure things out suits me. My greatest pleasure is my certainty in myself. Not caring how I’m perceived by others is truly liberating. I only have to answer to myself and the principles I adhere to in my personal journey of what I hope is honesty and integrity. And I honor the life I built with Michael and my family. That journey continues. But I truly don’t understand so many things that I wish would be factual and concrete. My son-in-law says the technology isn’t here for what I want to know. So I’m just accepting the way it’s going for me and I won’t be intimidated by expectations of any sort. I don’t understand a lot. That is certain.  But right now, nobody else does either. We conjecture away and try to find a place to just be our own true selves. Our places are not all the same. That’s where I am as my first year as an unexpected widow is coming to a close. I’ll cry a lot in the coming weeks. But I’ll still be questioning and wondering and living. And Michael will still be here with me. Although I don’t know how that’s happened. 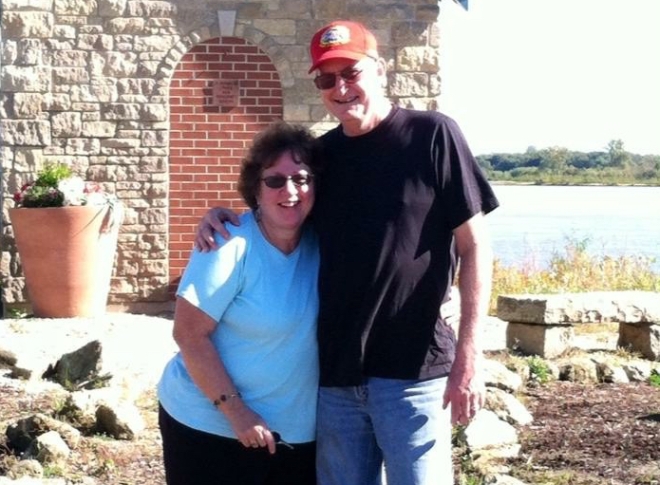